When last we left off, I was heading to bed early (ish) Thursday night because Friday we had another sort of adventure planned… 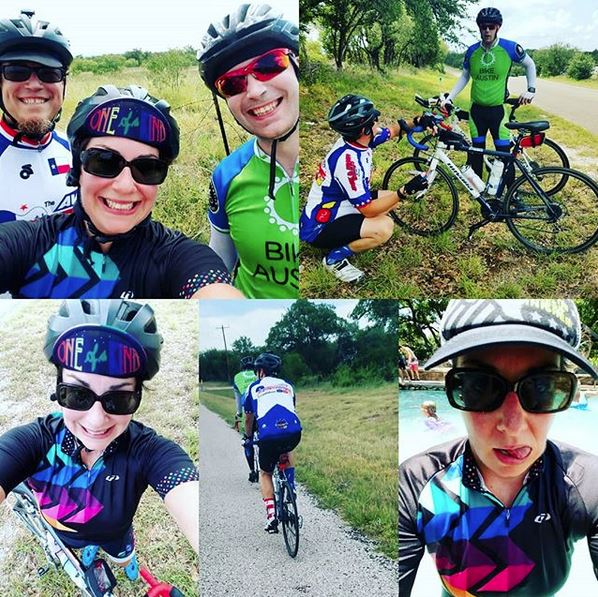 This year, instead of our mountain bikes and riding a few miles around the property, we brought our road bikes.  Matt was also on vacation fairly close to us, so we met up to go play bikes.  The weather was supposed to be rainy until 10am, so we planned that as our meetup time, but the sky held out on us so it was just humid and gross and sticky.  At present time, that kind of weather is no big deal, frankly, I’ve not only ridden but ran 10k in worse conditions a few weeks ago, but at that point I hadn’t acclimated yet and was WHINY AS HECK.

I also started with not very cold water and no ice in my bottles, and one had watered down crystal light ice tea.  This is not the recipe for success.  I had to pull over a few times to cool down when my heart rate spiked.  We tried to get water on the way back at a trailer park but no one was around to let us use their spout, so we rode back to town on fumes and I went immediately to the cold pool.  In my kit. 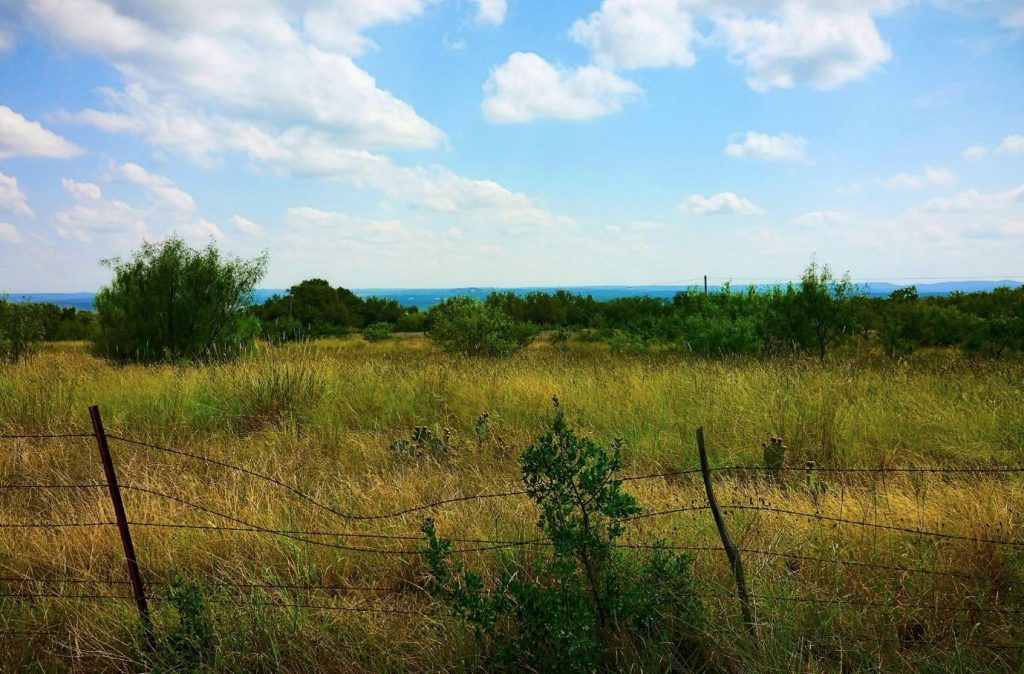 While at least half of it was a miserable ride, the views were worth the suffering.

Again, it’s funny how your perspective changes halfway into triathlon season.  Now, this ride wouldn’t have been a big deal.  Seven weeks ago, two hours on my bike in the heat tuckered me out!  Acclimation is real, y’all.  The rest of the day was for eating and reading and some dips in the pool and a side order of napping.  It didn’t suck. 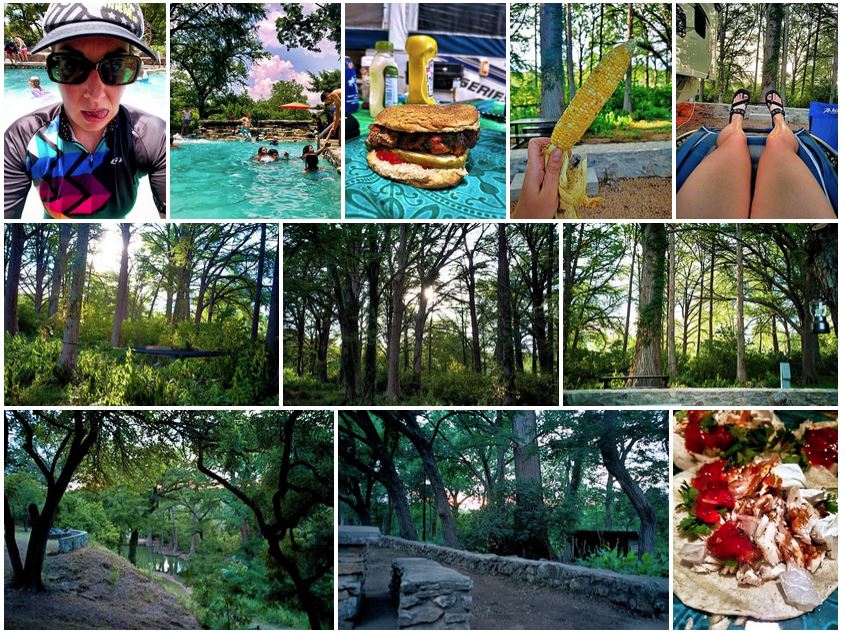 I got up for a few minutes to take pictures of the sunset and then went right back to being a sloth.  It was lovely.

My only goal for the day was to play with the fireworks setting on my camera while burning some sparklers.  It was a super productive evening!

On Saturday, I did have a major thing on my To Do list I needed to check off – take pictures of the falls area.  It was one of my favorite places to take pictures last year, and that was just with my crappy phone camera.

However, the weather had other plans for the first part of the day.  After a lunch of chicken, sausage, onions, and peppers, we had barely made it out of the pop up to hike down to the lake with our cameras when the storm started to blow in.  It did make some really neat pictures, though.  Maybe not the best quality, most ended up super blown out and I had to massively level and color correct them, but I think they convey how SURREAL it looked out there.

Later in the afternoon, we finally got our window and we hightailed it down to the falls area. 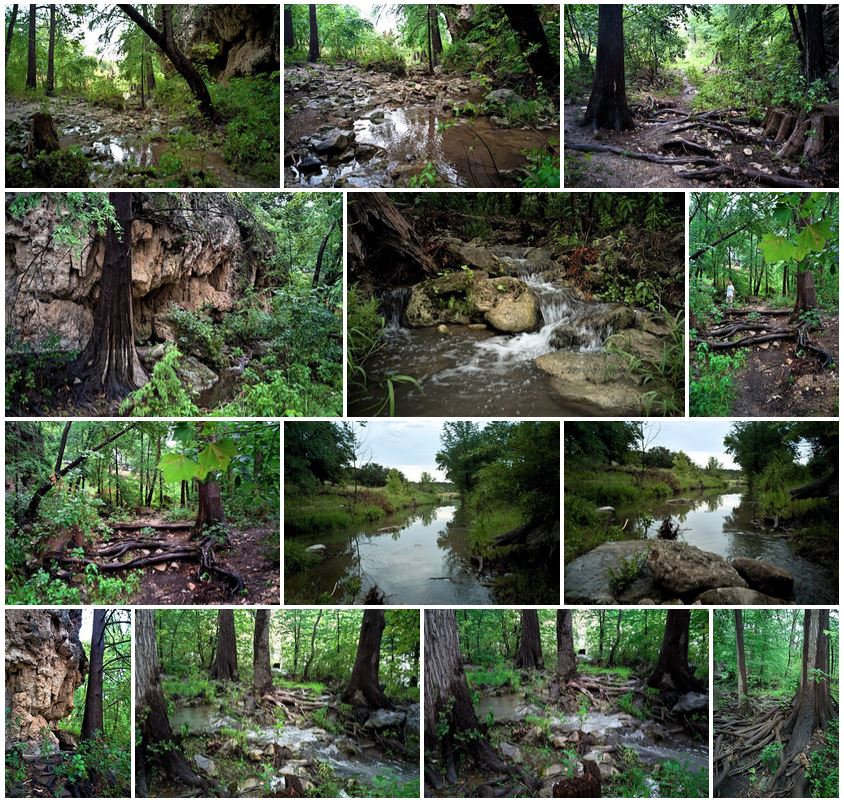 The fifth picture in the set will be my new age meditation album cover when I get around to recording it, hah.  The seventh picture in the set is one of my favorite pictures I’ve shot ever of all time.  It looks like fairyland.  I was a little grumpy about the lack of sunlight, but I’m pretty sure they turned out alright.  I think a grey day is kind of a rarity mid-July and I’ll certainly be able to get sunny sunlight pictures next year when we come back (because, yeah, that’s happening). 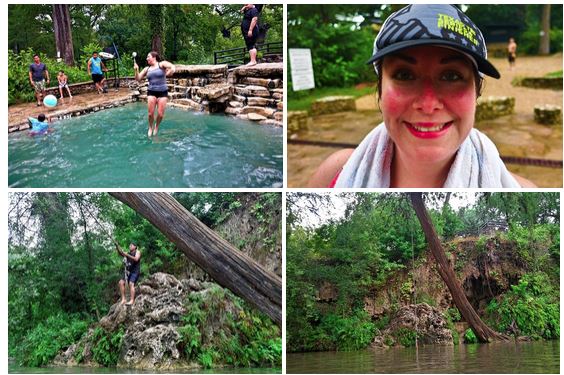 I’ve never seen the falls and the springs area so empty on a weekend!  I know it was raining, but we don’t melt, people!  I know I don’t, so I enjoyed the extra elbow room.  I tried to not be super pathetic and sad that we were leaving the next day, but it was hard because it was the truth.  I consoled myself with the last of the hot dogs and pasta salad for dinner and stayed up way too late not wanting vacation to end.

While I could have probably used more sleep Sunday morning, I got up around 9am so I could do a bunch of “one last things”. 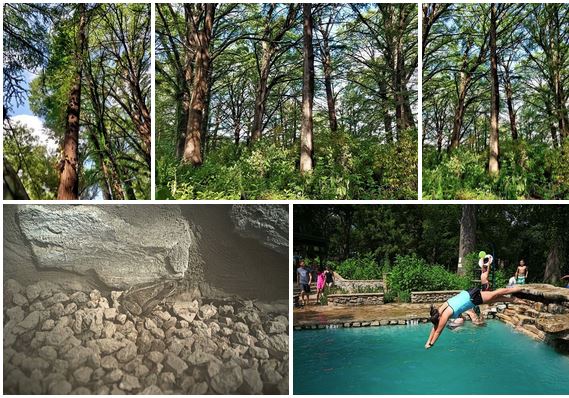 I took one last read and nap in the hammock (and a few pictures of the view as well).  I took one last dip in the pool.  We made one last batch of bean and cheese breakfast tacos.  I saw one last froggie.  And then, we put turtle home away and drove our hippie selves back home for one of the most satisfying showers in the history of the universe.

If six nights wasn’t enough last year, five nights was DEFINITELY not enough this year.  Obviously, it’s too early to really completely solidify next year’s plans, but I think I’d really like to camp the whole week.  I didn’t get a chance to break open the paints, and we didn’t touch any games we brought, I could have ridden bikes more, and even without all that, I could have just read, relaxed, and taken dips in the pool for another few days, happily.

Even though it’s just seven weeks removed, this trip feels like a lifetime ago.  My day to day has gotten so hectic, which is absolutely normal for this time of year, but still, it’s a stark contrast to the peace, the easy days, the silence.  I can’t imagine having so little to fill my time, so little to do, but not being bored in the slightest.  I’m looking forward to remembering it all over again next year.

You can see my full gallery HERE.