Woaaaaah, livin’ on a prayer… take my hand and we’ll make it I swearrrrr… 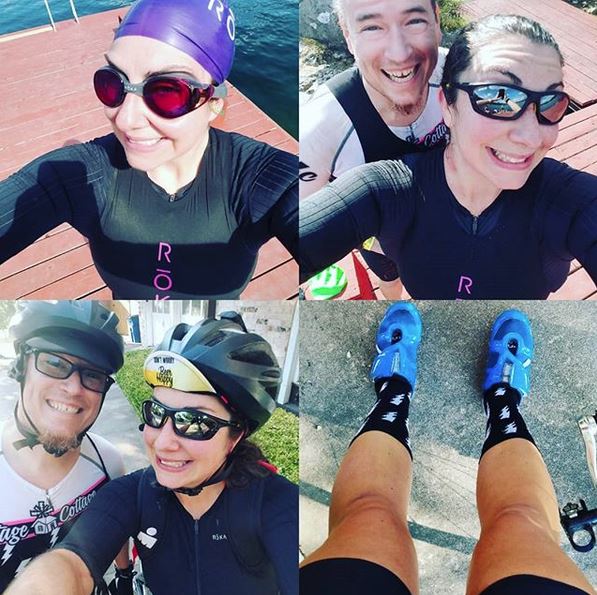 Trying out all the Roka things.  Do these goggles make my eyes look fat?  And of course a little Wattage Cottage in there because, well, duh.

Yes, I’m going a little nuts.  We’ve just passed the halfway mark in the training plan.  In seven weeks I’ve taken myself from a very sprint focused triathlete to getting some endurance legs without losing much speed.  We’re not there yet, but I feel like if the race was tomorrow I would SURVIVE it.  Barely.  Thankfully, I’ve got two more “blocks” left before the first race and I think I’ve allotted just about the perfect amount of time to build for this race.  Much longer and I’d get burned out and bored.  Less, and I’d be “cramming” endurance.  I’ve done a successful 8 week build to a 70.3 but it is definitely a quick ramp up and a lot of tired and sore and I’ve done 16 weeks successfully but it was after a long offseason.

Week 5 was not supposed to be *quite* as taper-y as it ended up being, but I’m actually glad it went down the way it did.  I only got in a short swim and bike (Tuesday and Wednesday) before heading to Cleveland, but considering how rough I felt after the trip, I’m glad it took it slow the week before. 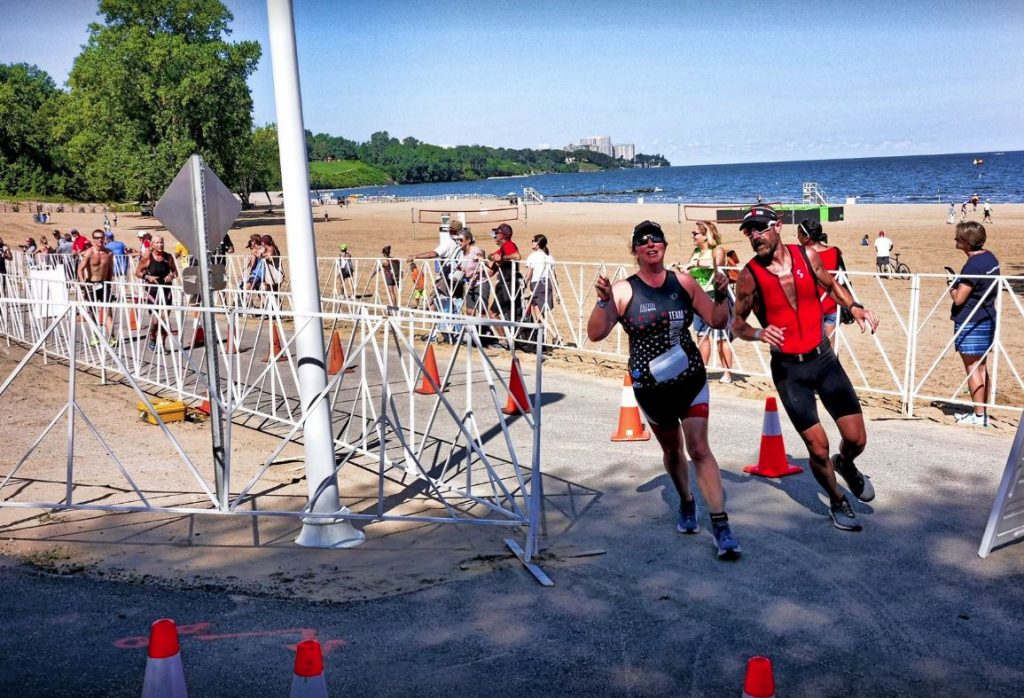 All the funny faces.

Week 6 was kind of a strategic retreat.  I figured I’d be a little pooped from two hard efforts back to back, and I’m actually pretty proud of how NOT flattened I was from the racing itself.  What took a toll on my was the sheer time on my feet the whole weekend and lack of rest/recovery.  I had almost 20k steps on Friday with no workouts, and Saturday and Sunday I had over 30k both days, when the racing only accounted for about 12k and 6k steps.  All told, I had almost 100k steps during that long weekend trip (92,062 steps per my Garmin from Friday – Monday).  That’s approximately 50 miles, friends!

Also,  I slept about 4-5 hours both Friday and Saturday nights (thanks wedding DJs!).  Due to late flights and changing time zones, I didn’t have super restful or normal sleep Thursday, Sunday, or Monday night either. In terms of recovery, I didn’t have my normal recovery tools while away, just a dinky travel foam roller.  I survived it, but I was BEAT afterwards.

I made it to my swim that Tuesday, but my heart wasn’t in it.  I dragged myself out for a 6-10 mile run on that Thursday morning and the answer was SIX ABSOLUTELY THE MINIMUM NOT A FOOT MORE and that was even pushing it, and I skipped all sorts of sessions I had penciled in in favor of sleeping in and maybe drinking a little more vodka than I should have some days.  My head, heart, lungs, and legs were all in agreement that I needed a rest week even if the previous week was kind of a rest week too in terms of training hours. 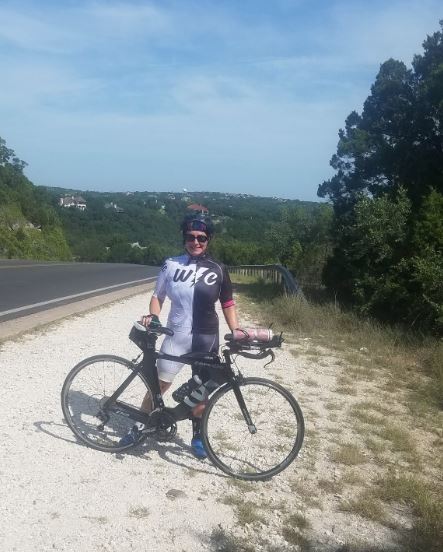 Note to self: Lost Creek after 35 miles of OTHER hills is not advised.  At least on this bike.  Probably on any bike, though.

I did rally for the Wattage Cottage hill challenge that Saturday.  This ride was a brutal 3200 feet of climbing in 40 miles.  I brought my tri bike in hopes of keeping up with the 16-18mph pace (which is easily within my grasp on a ride like Shoal Creek/Veloway/Parmer/etc).  However, the gearing on it is not exactly conducive to things that go up and up and up.  I only held 13.6 mph, and that’s not counting a few stops (and more than a few contemplations on just calling an Uber and forgetting about this whole nonsense).  I finally tackled Lost Creek, which is kind of a big deal around here, and while I’m a little ashamed to say I had to get off and walk one of the hills, it was in the last few miles of the ride.  On completely shredded legs just after I’d powered up the previous killer hill and the 20 million before that.  One day I’ll have my revenge!

Proof I’m not being unreasonably whiny.  This ride almost exactly 2 years ago involved cycling up a freaking mountain in Grand Junction. 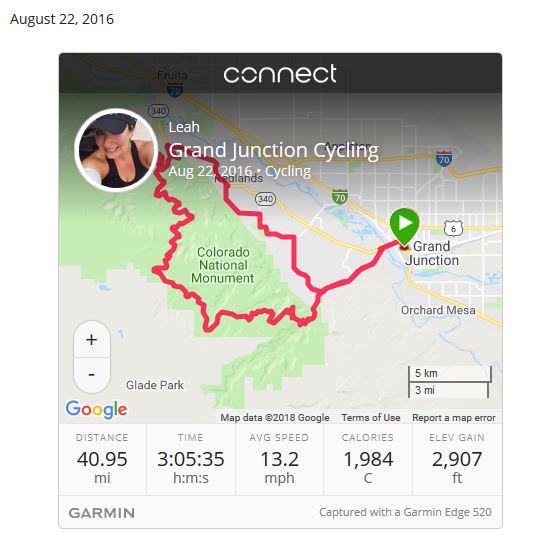 This was this weekend.  Similar ride distance, no mountains, but yet still more elevation. 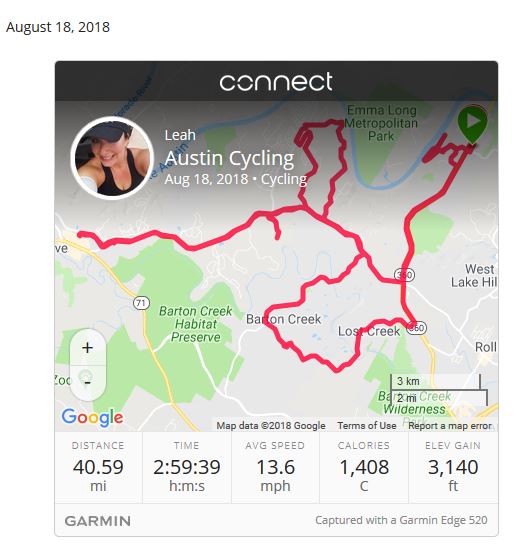 It was an amazing, terrible, wonderful, challenging, and terrifying ride.  Thanks to Wattage Cottage enough for setting it up, and Roka, Floyds of Leadville, Foil Wheels, for providing prizes, and Cryofit for supplying the meet up place.  I feel like I’m a better cyclist and much more comfortable on my TT bike after the last two weekends of riding it in towns.

After the ride, I was smashed.  I ate two whole PBJ sandwiches and drank two bottles of water in about 5 minutes.  We had planned to change and run 3 miles around the area, but the idea of more hills and no shade in that heat just made both of us feel like crying.  However, we are triathletes.  We went from bagging the run, then on the drive home, we decided we could do a mile.  Just twice around the block.  Then, I talked myself into the whole run, but whatever pace.  Slow was fine if I had to.

Then I ran 9:30/mile pace for 3 miles in feels like 103 degrees because either I’m a badass or I really just wanted to be done for the day.  Maybe a little of both.

Week 7 marked the kickoff of the last 3 week block of training before taper.  This is the last push, folks.  I can do it! 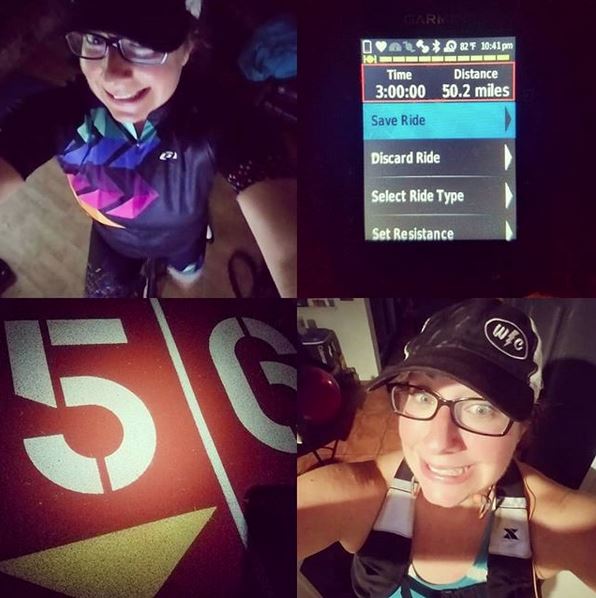 When you can’t handle ONE MORE 5:30am alarm you instead start your long brick workout at 7pm Friday after work and finish up around 11:45.

Things I did not nail:

All in all, successful week.  Two more like it please!

I had a note on the last two weeks of this block to take stock and decide whether I felt like I needed more speed or endurance.  Normally, around this point, I’m slow as molasses but feel like the distances are no problem.  This year has been all about speed, so I’m in the opposite boat.  I’m actually quite speedy right now (for me), but I definitely feel like I can use some endurance practice.

Doing a double digit run a few more times at race pace is going to do me more good than hitting shorter speedwork (which I’m kind of doing on my brick runs anyway).  I’ve now done 50 miles once on the bike (and multiple rides in that same 3 hour range that were slower but harder than the race will be), but I’d like to hit 56 at least once or twice more.  Ditto for the swim.  I swam longer than the race distance yesterday, but it was slow.  I’d like to come in closer to 40 minutes than the almost 50 it would have taken me at that cruising pace. 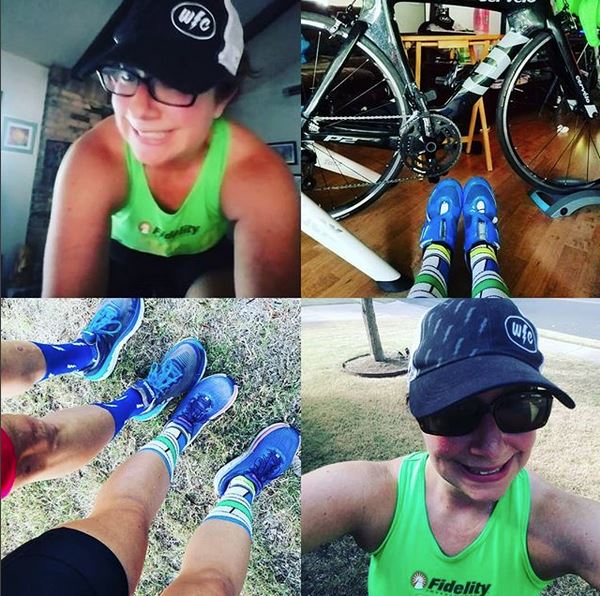 Sometimes #sockdoping is the only thing that helps you make it through.

I’m not going to deviate ALL my training to long and slow(er), but my Tuesday long run and Saturday long bricks will stay long, and I will have to actually do my long swims even if they’re inconvenient, instead of deciding that it’s easier to just swim 1000m over lunch in the pool and calling that good enough.  This week looks like this:

My non-training goal is to stretch and roll at least five times this week.  One down this morning, four to go.

One more week after this one and then it’s time to taper!

As for nutrition, I feel as if this is probably my most successful build in terms of eating mostly not junk food and also actually still making some weight loss progress.  Baby steps, but still in the right direction.

Although, it’s frustrating to be slated to be losing so slow, I’d rather lose 2 lbs per month than maintain or gain. 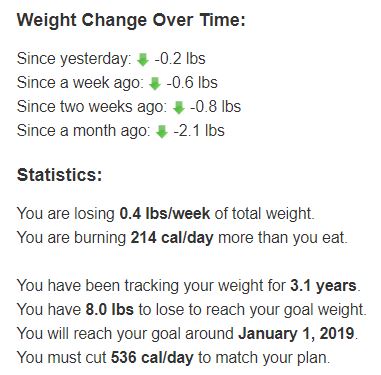 And, let’s face it, I’m not being perfect, not in the slightest.  I ate with reckless abandon in Cleveland.  I couldn’t stop eating the whole day after the Hill Challenge to the point where I even surprised myself on my food consumption and had no idea how to track it after the fact because I couldn’t remember everything I ate, let alone the quantity.  Let’s face it, while I am eating good food and tracking *most* of the time, I’m not as religious about it as I was in say, April, so I can’t expect those kind of results. 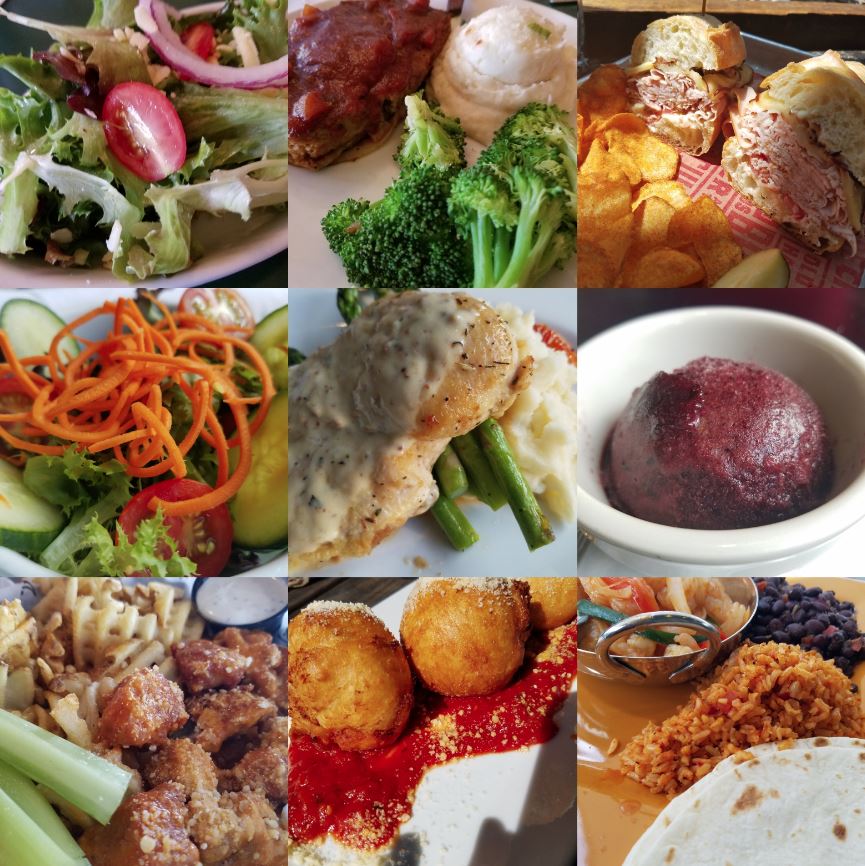 Some of the wonderful and terrible things I put in my mouth in Cleveland.

It’s not really worth it to go back and assess diet quality or calories because I’ve got so much missing data, but it’s encouraging to see the line still going down.  I’m real real real real close to start seeing 169.something.  Even if it’s slow, I’ll keep hanging on to live in the world where that happens.

My head is starting to shift a little.  I am starting to transform from pudgy me to athlete me in my brain.  I’m starting to mentally grow into the current size I am now and it’s pretty nice to have my self-image catch up with the positive changes my body has made.

So, this is life right now.  Work.  Training. Trying not to eat like an asshole.  Showing up for the important stuff for family and friends.  That’s about all that’s above the suck line right now.  During heavy training, and frankly, during HOT training, I feel so zapped after it’s hard for me to rebound and become a person.  As weird as it sounds, my version of self care is sitting on the couch watching Star Trek or reading about sports psychology and drinking whiskey without having to talk to another gorram human for hours.  Quiet, relaxation, silence.  I’m pretty sure I’ll be more of a human person in the coming months, but I need to be a little introverted right now to get through the rest of my training with my sanity intact. 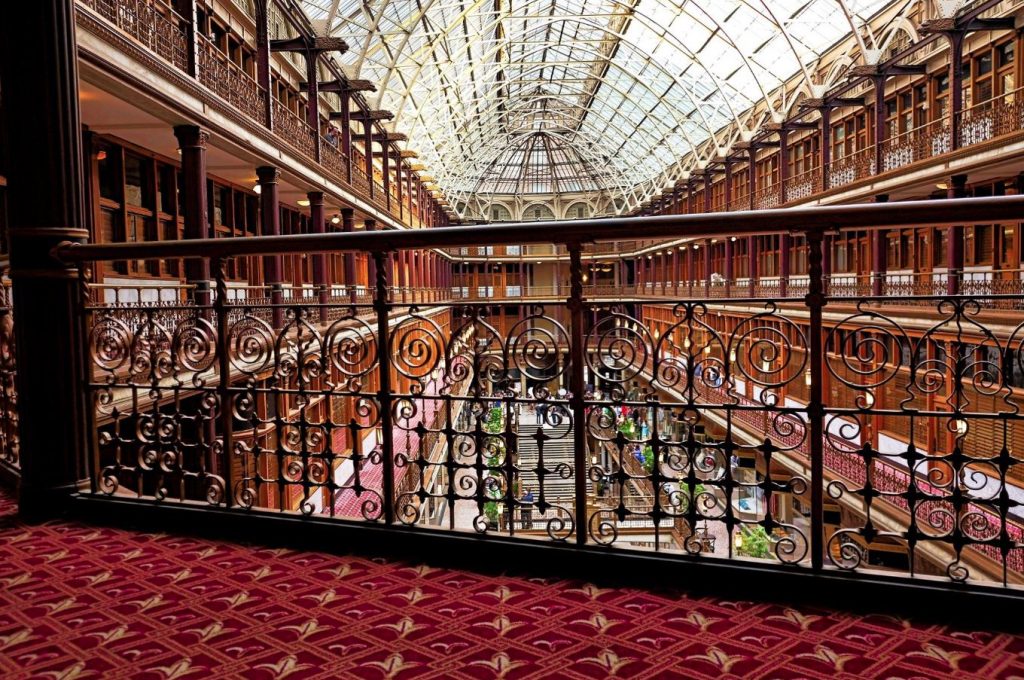 The gorgeous Hyatt Regency at the Arcade where we stayed.  Half my pictures are just of the hotel…

The one thing I can report is that I have edited all my photos!  Krause is HERE, my (much smaller) Cleveland set is HERE.  While I hope to chip away at getting the best ones up to my iStock, Adobe, and Shutterstock sites, it’s nice to know that I won’t have any more editing to do until I get back from Cozumel.  I also sold one more photo, the same one (the crab) on the same service (Adobe).  I thought that was a little bizarre until I went searching for it myself and it’s the second photo that comes up when you search “crab underwater” so I got the keywords right on that one at least!

12 days until I’m officially in taper.  Approximately 15 more workouts.  A few hundred more miles.  Only about 4 more pre-sunrise wakeups.  I can do this!

Eight is almost enough (to taper)