I guess I race this weekend.   Just the way I said it shows you how I feel about it. I’m ranging between mild apathy to mild excitement but there’s no talk around here about meeting the man with the hammer, or race plans, or nervous energy.  Just silly faces. 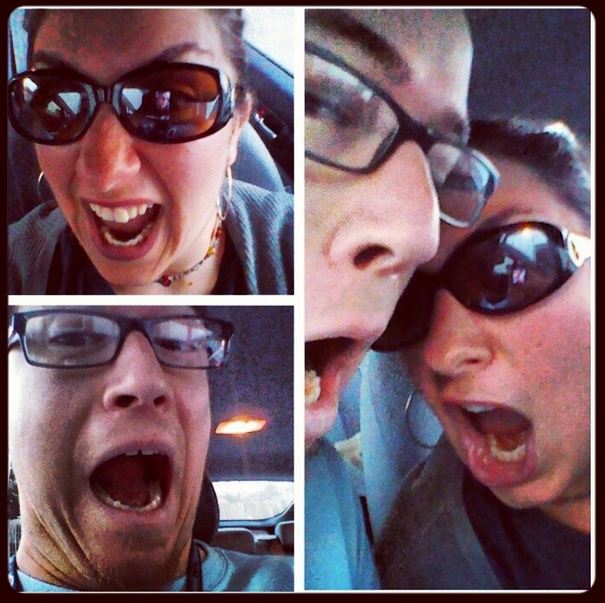 Folks, we’re quickly approaching what I like to call the “messy middle” of the first half of my triathlon season.  First comes the embarking on the quest – the first week or three of checking the boxes and being all smug that they’re all green, and it’s new and fresh to be putting in the miles and two-a-days and three-a-days and feeling that deep fatigue of training on a tired body and smiling because it’s been a while.  The return to being a fish in the water and swimming for a reason besides “do something for crosstraining and so you don’t forget how to swim”.  Climbing hills on my bike, whether it be outdoor ones or slamming the resistance down to max on the trainer, and seeing the bike miles in the hundreds instead of the tens for the week tally.

The end of the season is another animal.  Finally coming out of the haze and exhaustion of months of hard training and lots of miles.  Having that A race within spitting distance, close enough to get excited, close enough to get butterflies, close enough to start visualizing yourself on that line and imagining how it will be that day.  You are standing tall, with your bike, your goggles, your shoes, perched on top of your training logs, standing with those super fit legs from all those early morning spin sessions, two mile swims that make you leave the gym just as they’re closing, runs off the bike that make you dig for the rest of what you have…. and you’re ready to kick some major A race ASS.

Somewhere in between there – the newness of the “I’m following a plan again for all three sports and it’s awesome and triathlon is awesome” wears off, and it’s not yet time to start getting geeked up to toe the line in a useful way, and thus – the messy middle.

I’m quickly finding myself there after the first big training block.  It went REALLY well, it was fun to be back at all 3 sports, but I really felt it last week – tired both in the body and soul.  I had moments where I just wanted to get off the rollercoaster and let it pass by.  It took some major revisions to the plan to make this week work – and there will still be a yellow (did something, but not as planned) and a red box for the week (one modified run to a bike care of ouchy heel, and one skipped swim because of sanity reasons).  I didn’t plan well, because I had 8.5 hours on the plan, and one skipped session = 9.5 actual, so it probably worked out for the best.  Because you have to be adaptable.

Adhering to a schedule that I wrote 6 weeks ago through hellfire and brimstone is just crazypants if it doesn’t make sense.  Being self coached and writing my own training plans means I go through a lot of “the fuck was I thinking” moments later in the season and I have to adjust.  Right now, I’ve learned that after a big block, including the most hours you’ve ever trained in one week in your life – your body is going to have a mind of it’s own and force you to dial it down a notch whether you were hoping to eek out another 2 weeks of volume or not.

It’s not a failure to adjust (and maybe you all know this but I need to remind myself this).  It’s all about figuring out what the spirit of the week’s plan was and try to keep that going.  For example, this week was about the return to running more + speedwork – in time to get the legs sharper for this half marathon race I signed up for next weekend.  My body said NOPE on the more run miles, but was (a bit reluctantly) handling speed a-ok, so I rolled with it and did a lot of speed sessions where it made sense (and once where it didn’t – oops on run speedwork AM + heavy weights and swim speedwork PM – I slept well THAT night).

But circling back to this weekend… this race on Saturday is not an A race – I’m not even training specifically for it, besides the half-hearted attempt for 2 weeks of run focus that isn’t working out so well, or tapering for it.  I suppose you can call an 8 hour week reduction, but much more than I’d normally do on a taper.  I am going to run it hard (not as just a training run), but I won’t be disappointed at coming up short on PR attempt number 2.  Reaching for 2:07 is all that is required that day – whether I touch it and grab it or not is irrelevant.

My entire strategy is:

B) See what happens

Sure, I will probably go out around 9:30s, but maybe I will not, because it seems like my body needs a bit of a warmup lately, and that seems to pay speed dividends later.  I’ve had almost 11s feel hard and 9:20s feel easy on runs lately under similar conditions, so it really depends on which legs decide to come to the party.  I’ve even considered ditching the garmin, and following a pace group, or maybe just running completely by feels.  It’s all up in the air and I’ll make the call around 6:59am Saturday, most likely.

Either way, it kicks off a rest week, and heaven knows I am so very ready for a true one of those right now.  After mad sleep and not too much crazy this weekend, I’m ready to get through one last week of all of it, and give some fast running a go, if nothing else but a judge of where my fitness is right now.

The results blog will be a little delayed due to circumstances beyond my control, so if you are on the EDGE OF YOUR SEAT to find out how I do (which you shouldn’t be, because I’m really not, but hey…), you can follow me on twitter – @quixotique

You Know You’re An Endurance Athlete When…