I’m not sure anyone in their right mind would ever say that 8 weeks is a perfect amount of time to train successfully for a half ironman race from offseason, but that’s just how I’m feeling right now.  Let’s talk again about 2pm on September 28th depending on whether I’m miles away from the finish or already at the beer tent, but I’ll happily ride the high of it right now. 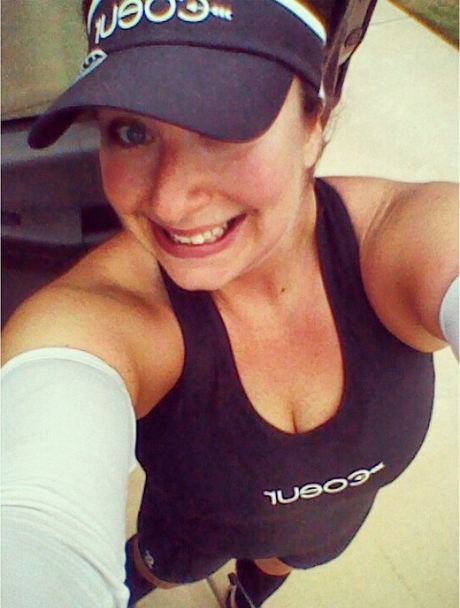 Also, new tri top and visor.  Love them both!  I won them in a contest, how awesome is that?

My other 70.3 training block experiences have been either after a LONG LONG season as my goal race, or less than six weeks back from zero because of an injury.  Neither seemed to be optimal for me.  Last year (my 3rd) didn’t go so badly, I PR’d by 29 minutes, you can never complain about doing better than you’ve ever done, especially when it’s the amount of a short lunch break.  I may have even done just about the best I had in me at the time (my run game was still in the crapper).  However, I definitely made a lot of training mistakes that I think I have fixed (or at least done better with) this time.

1. Taking a break mid-summer was the best thing I could have ever done.  I was able to do fun summer stuff, I was able to unload all the mental and physical early season stress, and I didn’t burn so many mental training matches pushing through training in the heat, which meant I was able to do it when it counted.  Last year this time I had dealt with heat sickness and heat sensitivity and some pretty decent overall burnout.  I like this year better.

2. Doing a race first week back sounded like a terrible idea when I signed up, but it was a great measuring stick on where I was at, and a great welcome party to season part 2.  It made me super excited for this 2 months to start out with a (really good) race effort at a short distance.

3. My answer to any long distance race in the past has been to throw more and more mileage at it.  This has left me feeling (over) prepared, but a little crispy and mentally blahhhh by the race.  You can’t fix months of tired in 2 weeks of taper without completely shutting down and losing fitness (hi, earlier this year!).  This time, I didn’t have the ability to throw months of long rides and runs and swims at the race, and Zliten gets exponentially crankier the more the hours climb after 10 per week, so we had to train smart.  Each session had to count.  Each session had to have a purpose.

4.  When each session had a purpose, it was easier to remember to pick up the intensity.  The first few weeks were just volume building, but the last few weeks, everything was either tagged recovery or had a specific goal or pace.  And that pace was definitely not 100% easy.  Very little soft pedaling on the trainer, focused running, and swim sets in the pool or alternating easy/hard efforts in the lake. 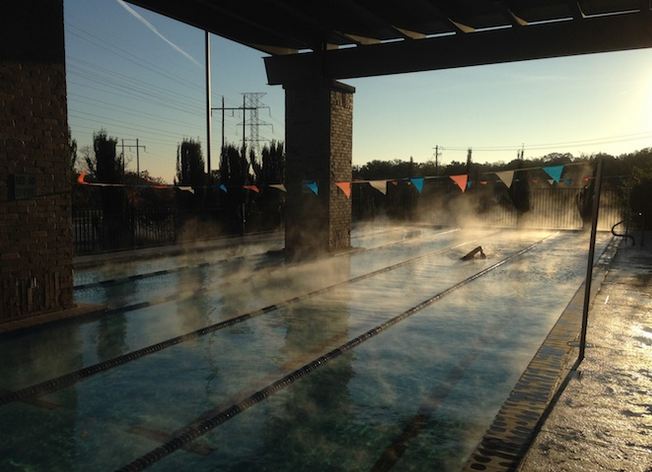 And when this, or this is where you swim on the daily… 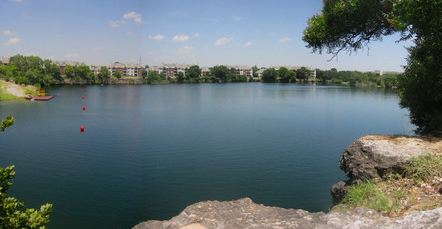 …its pretty hard to get super grouchy about life.

5. Mentally, I never really felt like I was down deep in that depressing hole of “wah, the race is so far away and training is never going to end” because it was so short and focused.  I’ve been able to attack each training session with enthusiasm, instead of whining “is it taper yeeeeet?”  This is so good for my head.

I’m going into this race a little curious about what my legs have, what my lungs have, what my heart has in it.  I’m getting goosebumps to toe the line this year, not because I’m nervous for a race I’ve done and finished 3 times, but because I’m a little more than excited to see what’s inside me that day.  What have I cultivated in this little triathlete garden of mine in the last 12 months?  How different of an athlete will I be on that familiar course?

6. Recovery.  I’m recovering like a mother fucker these days.  In the last few weeks, my legs have sprung back to life like little champions after hard efforts, and I love it.  I can smashy smashy, and it doesn’t lay me up the way it used to.  I wish I could attribute it to some lovely new stretching/rolling/whatever routine, but I’m not doing that stuff (I know, I should, I do sometimes but not as regularly as I should).  On days off, I could certainly picture more recovery miles, and I seem to be able to be pretty much ON on my hard days.

7. Fueling.  Part 1 is the workout stuff.  I gave up on chews and I’m now back to gels.  I tolerate some better than others, and I’m working through those logistics, but it’s much easier to get the gel out every 45 mins than fumble with the bento box or handheld pouch every mile or two to get a crumb out.  Without fail, I eat before any long or hard morning workout, and have butter coffee right after.

Part 2 is the rest of my day.  I am not perfect, and I may have a long way to go to get there, but this whole no bread/pasta/wheat/rice thing is really working for me right now.  Corn and potatoes and fruit are fueling my 10-ish hours a week of training just fine.  My stomach feels less like a bag of farts and fluid most of the time.  I’m pretty sure this is part of the recovery success.

I still do not understand the lack of weight loss, but my body is weird.  I’ll roll with it.  I’m eating much cleaner than I was this time last year, so I’ll take it. 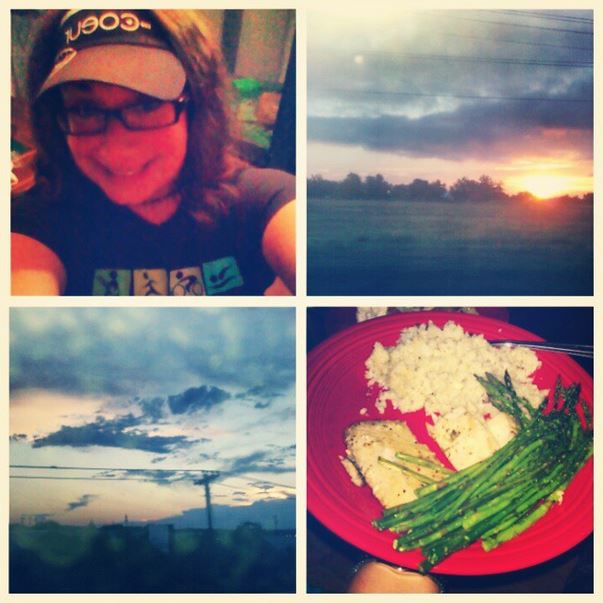 I realized I’ve been very type B about logging my training here, so here’s a little more on this for posterity:

Week 0: 5.5 miles of easy peasy to get back into a training schedule, and then Jack’s Generic Sprint Tri Race.

Week 1: 10.5 hours total – swim focus week, bike secondary.  3 hours swimming, 4.5 hours riding, 3 hours running, one strength session.  Not much intensity.  Just logging the hours again.  This was like dragging myself by the nose, it was rough.

Week 2: 11 hours total – bike focus week, run secondary. 45 mins swimming, 6.5 hours cycling, 2.5 hours running, 1 strength workout.  Another rough week, because I started to pick up the intensity just a little.  Mostly in the bike (this was my first endurance cycle class, another spin class, first Ronald Reagan ride), but I finally start doing sets in the pool also instead of paddling.

Week 3: 10.5 hours total – run focus week, swim secondary.  2 hours swimming, 4.5 hours cycling, 4.5 hours running.  This is where I sort of forgot about pure strength work in favor of strength building (harder) workouts.  Still mostly volume in the run department, (24 miles with a 13 mile long run), but I kept the intensity in the bike with an endurance class, and while I swam easy in the lake, I kept to sets in the pool.  I was happy about a stepback week the next week, but also finally started feeling like this 70.3 wasn’t a crazy idea.

Week 4: steback (7.75 hours) – balanced.  1 hour swimming, 4 hours cycling, 2.75 hours running. I intended to get some test data, and tried, but I’m not quite sure what to do with what I got.  Apparently my zones on the bike are just about as high as I thought (130 tops out my zone 1, if 160 is my lactate threshold), and I just need to work HARDER.  My swim test was 18:20 for 976m (normalized for my werid length pool), though I forgot my garmin and did it on the pool clock and got interrupted twice for people asking me things so I probably could have done better. 😛  I skipped the run test because I was needing the whole stepback part of the stepback week and the only speed I did this week was one fast mile off a long bike.

Week 5: 11 hours – run focused. 1 hour swimming, 6 hours cycling, 4 hours running.  This was the week where “sharpen the stick” started in full effect on the bike.  Stupid hard 1.5 hour endurance cycle class + race pace hour run one day.  Lots of kicking my own ass on the trainer, nothing easy there.  Another easy pace half marathon run where I had energy for days after (easy pace these days is about 1 minute/mile faster than last year’s race pace).  Very encouraging week.

Week 6: 10 hours – the week of the brick.  2.25 hours swimming, 4.5 hours cycling, 3.25 hours running.  I did the endurance cycle class + 30 mins running Tuesday, then a long swim with a hard effort at the end + 2 miles running Wednesday, then a medium paced bike + race pace hour run on Thursday, and lastly a long-ish hard bike + race pace 4 mile run Saturday.  I did 2 hard swims and 1 easy, and lots of smaller recovery runs in there.  I was flying high after Saturday’s brick, it was a great way to close out my last workout before taper, and I feel ready.  Let’s go! 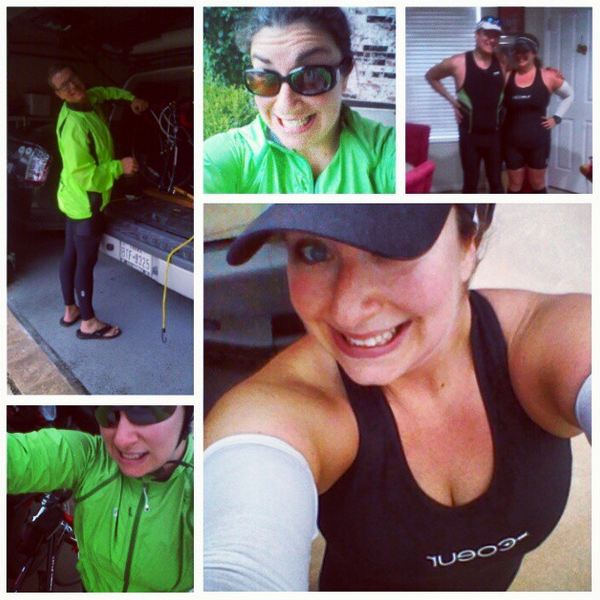 The endurance hay is in the barn.  I’m here, and I feel powerful, capable, and confident.  Now, it’s time to do all those things for the next two weeks that keep you sharp but let you recover.

And, there’s a whole lot of words on the current state of affairs.  Now, along with the stick sharpening, it’s time to really start visualizing the race, focusing on the details, and coming up with the plans and goals and what I want to stick in my head to help me along the way.

Or maybe not.  Maybe it’s time to go into the great (known) unknown and just find whatever the day gives me.  That’s worked well at times this year.

Apparently, there are a lot of sticks to sharpen this week.