I know there is some vacation recaps to do and I’m working on that, but honestly, I’m not really ready to admit it’s over and that (plus editing and sifting through 1000 diving pictures <- not an exaggeration) is not happening yet. 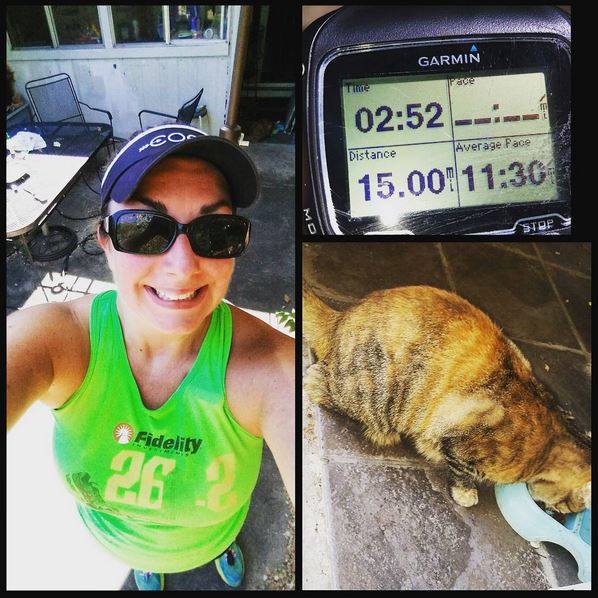 However, as things are wont to do, life goes on, and let’s discuss a little of that.

Having this vacation was the perfect thing for my mental state, for various reasons, one of which is I’ve kind of been in an endurance sport…funk after my race.  As time has gone on, I’ve come to terms with the result and the physical issues.  I mean, come on, if life hands you a bag of shit on one of the most important days of the year, you’re going to eat shit sandwiches.  It happens.  Between womanly issues and the bike crash, it was not my day to sub-6.  That’s ok.

Spending 15 hours in the ocean was healing both for my body and mind, and I started this week as a transition into marathon training with an open mind.

I also decided that I needed to take some of the pressure off.  In my head right now, this marathon is a training run.  I’m going to run as much as I can (healthily) to be prepared for it, but I’m not going in with do or die goals.

I’d like to run the whole thing, unless, of course, I deem that run/walk will get me to the finish faster (which sometimes when I’m dealing with shit, it does).  I’d like to finally have a marathon PR with a 4 at the beginning, instead of the maddening 5:00:57, but if it’s not my day, that’s ok too.

I started the week feeling a little ennui for running, and for starting a 5 month block of marathon training.  That was not encouraging.  It makes sense – our version of fall hasn’t really and truly hit yet, our temps were still in the 90s, and I started back after 16 days off.  I just expected to feel a little more… something.

The thought “you can always drop to the half” rang through my head.

Then, this weekend we set out on our first long run.  I was a little intimidated to tackle 15 miles the first week back, but I already felt a little behind since we race in 6 weeks, so I wanted to go out at least with the intention for something long.

Things came up – I got a hole in my capris and had to change, I had a little heartburn at first (note to self: berries before a run, good… apple… a little too acidic).  It got hot, I got sick of running culdesacs.  The last two, I did whine about that when I started to get low around mile 9, but Zliten made me eat a gel and I was all better.

However, the promise of maybe I don’t suck as an athlete came on around mile 11 when I sped up to the range I would consider goal marathon pace if I was setting one, just on instinct and all on my own.  I ran the last 4 miles 30-45 sec faster than the first 11 without even trying.

Maybe there is a decent marathon in me yet.

I also finally felt a little bit of the joy again.  I couldn’t think of a better way to spend the morning (although I could have spent it a LITTLE cooler, the run ended at “feels like 85”).  It got a little harder at mile 13.5-ish, but not unbearably so.  I guess that muscle memory of all the miles I ran last winter didn’t completely go away and I felt like maybe I could leave my frustrations with Kerrville behind and focus on having the best next 6 weeks possible instead of being full of doubt.

Next week I’ll do things like starting to actually plan workouts and mileage and wear my garmin and HR monitor more (maybe) and eat with a plan and track it and stretch like I’m supposed to and be an athlete with a purpose instead of just going out aimlessly to do whatever for miles.

It was just required to have one good run first, I guess.

Why I’m Leaving Austin and Moving to Bonaire… – Part 1