Some days you have that little extra something special, and some days, all you can do is execute on your training and roll with the punches.  I was missing a little bit of fire from the beginning but sometimes that resolves itself. Today, it lingered. But, you play the cards you have on race day, and I didn’t have a bad hand, just not a royal flush. 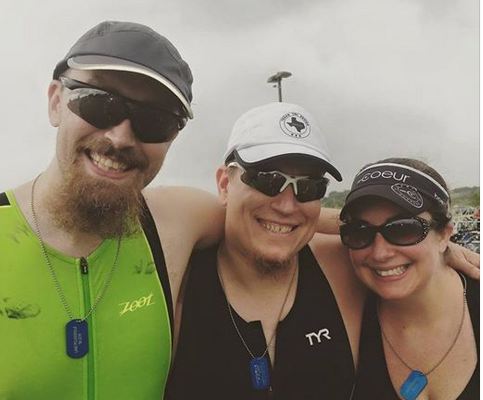 But really, I think the root of my issues were a little more biological.  I spent Friday outside in the lake which was fun, but probably not 100% the best race prep.  I didn’t sleep well the night before.  I have been cutting calories a bit over the last few weeks.  I spent the three days before at a higher calorie count (around 2000 per day), but it might not have been enough.  My husband decided to make our caff drink half strength for some reason because he thought I didn’t want any and I didn’t realize until we were on the road.

And… honestly, after a clearer head today and writing this all up, it’s so clear there wasn’t really something magical that was wrong with me, as I had convinced myself there was during the race.  I ate breakfast at 4:30am (kind bar and coconut water) and my wave didn’t go off until after 8:15, and I consumed approximately 1.25 scoops of heed and one gel until I hit the finish line, around 10am.  That’s just not enough.  When I get on the bike in a sprint feeling hungry, it’s not a good sign.

On the flip side, I’m saying all these things about something that was actually a pretty good breakthrough for me, overall.  And it’s hard to be taken seriously bitching about a PR, which I’m not.

I did not get a chance to do a swim warmup due to a long porta potty line, but I was pleasantly surprised it felt slightly crisp (79 degrees w/no wetsuit feels nice to me). It was my first wave start (not TT) in a year, but I felt like I handled it decently and didn’t get stuck behind anyone, and didn’t have to beat anyone up to get in position.

Oh my, the nature, though. The first and last ~100m were to the surface with hydrilla. It was a fight. I figured I was going to end up covered and tangled in it, will be interesting to see the swim out pictures to see if I had any extra… erm… jewelry. The rest of the time I felt like I was swimming strong, I didn’t sit behind anyone going slower, I kept a fairly smooth stroke, I kept the effort honest.

My watch shows about a 1:56/100m pace for .36 miles (580m). That’s pretty good for me in open water.  I’m pretty happy with this. 23 seconds better than last year, which was my previous PR, and there was significantly less nature. Win.

I feel like I’ve had solid transitions here at Pflugerville the last few years and this was no exception.  I was curious why it took me a little longer and then realized that they expanded the parking lot, so transition was bigger.  It was a difference of 9 seconds, so no worries there.

I got on the bike and got going and could not get the heed in my system soon enough. I tried to find that insane effort I’ve put in the last two races and it didn’t come right away, but I just did my best to get to work, drink my drink, and pass all the people (except the few on super bikes that passed me).

Then, around mile 4… it started to POUR. At that point, my head got all negative.  The roads were in awful conditions in places (good old Pflugerville roads…) and I felt like my biking sucked today and actually had the thought that I was hoping they would pull us from the course because of the weather (what?) and then after the 3 sisters hills I realized I needed some caff and calories, stat. I worked on a salted watermelon gu over the next few miles and eventually things got a little less emo in my head.

It rained on and off, people actually were fairly courteous on the bike and exchanged friendly banter, and I held about 22 mph on the nice long 130 frontage road stretch. Then, as we were turning in, the sun started to come out. No, no, no, no, NO! With the humidity, if it turned sunny, it was going to feel like a billion degrees on the run.  I also had to slow for an ambulance almost fully blocking the street.

I forgot to do the “spin easy” thing into transition but it all worked out since I hadn’t ripped my legs off that ride anyway. Considering the rain, and the fact that I had to bike a little more cautiously than normal, and how I was feeling, and all that, I still pulled out a PR (from 2 years ago, actually, which was before this year, the hardest I had ever ridden my bike in my life) by 25 seconds.

Since I had to hold back a bit on the bike, I was a lot less spent than expected, so I made my way through this quickly.  Even with a bigger parking lot, and a completely SOAKED transition, I took 3 seconds off last year.  Win.

This is where the wheels fell off, kind of. The steep hill out of transition was so muddy I slipped down it a few times. That didn’t help me mentally to start off.  I got out on the run, and I couldn’t get my legs to turn over.   There was no reason.  It had stayed cloudy, so it actually wasn’t too hot (though humid as fuck).  The rain had actually made the trail feel LESS slippy to me.  I just could not will my legs to go any faster.  I tried not to panic, and just to roll with it and work into the effort gradually, because sometimes my first mile just sucks.

I tried to consider another gel in the first mile but it sounded revolting, and for some reason in my head I was worried about wasting it if I couldn’t get it down? (more race brain) so I just tried to get through my bottle of heed as quickly as I could, though more of it probably went on me than in my mouth. I just wanted it to be effing over. That’s all that was through my head. Get to that finish so I don’t have to be running anymore.  One more tiny little loop around Lake Pflugerville until I can get with the offseason.

I tried to pick it up a little in the second half, especially when I realized that a 1:30 was still in reach if I put on some gas.  I succeeded, a little, because I negative split each mile, but it was… lacking. I gave all my oomph on the home stretch and cramped on both sides of my ribs. That was new. Joel said I looked REALLY rough running it in (I can’t wait to see those pictures if they caught my face), but I was soooo close to that 1:30. It ticked over before I crossed, sadly, but it definitely helped me not to quit fighting along the way. 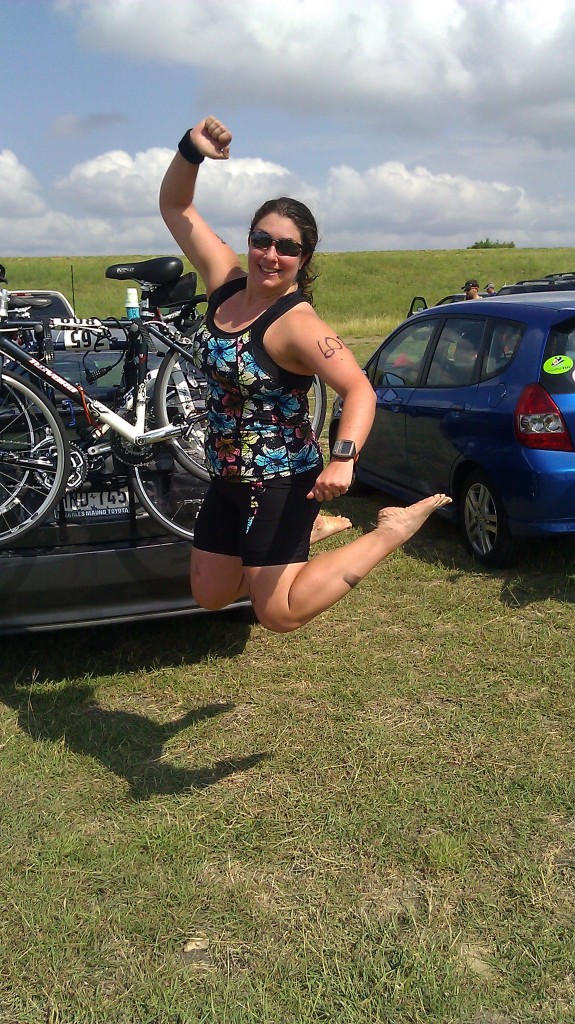 This was me jumping for joy here 3 years ago, and yesterday, I did over 2 minutes better.  I’ve been consistently 1:32-something the last few years so while I could have had a better day, this still is progress. 9th/27 AG, 89/290 gender, top half overall. While none of my performances were great in and of themselves, really, I was able to put together a fairly solid race to show that I’m a few feet ahead of where I have been the last few years, which have been feeling like a game of inches, especially with this race.

Now, 5 weeks of offseason. I am so ready.  Physically, I feel like I could get back to training tomorrow, and mentally, it’s kind of hard to accept that I don’t have to put together a workout schedule until the last week of July, but I know it’s for the best and once a few days go by, it’ll totally be the new normal not to be swimming, biking, or running all the time.