Back to life, back to reality.  Plenty of things to catch up on, so let’s roll! 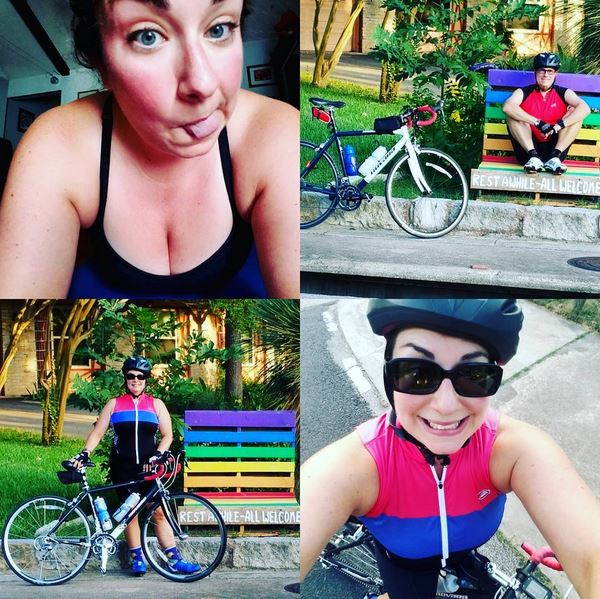 You’ll hear “it was my first week” a lot in this post.  While I always try to take care to not overwhelm myself with changes, a new start sometimes does provide the opportunity to change your routine a little more than normal without it feeling like a hassle.

Last week was my first week with a workout schedule that is not just a suggested whisper.  It’s not x-weeks until a big race, it’s not a build to anything impressive, it’s just time to start doing something more regularly than just whenever I feel like and hitting all 3 sports (and returning to lifting heavy things, even if those heavy things right now are my body).

Ironman has completely fubar’d my perspective, because in six weeks I’m going to ride a full century, and I’m still sticking with “not training for anything big”.  I suppose the difference here in perspective is that I’m training to SURVIVE it, not hit a number, not to swim before or run after, and I did it plenty of times earlier this year.  And it’s flat.

This weekend I rode 63 miles with about 3k of climbing, with the second half in feels like 100+ (and ended in actual 100+) temps and full sun.  While I was complaining a LOT about the heat, there’s still a little bit of Ironman left in my legs.  Besides the deathball trying to stomp on my lungs all day, my legs felt remarkably… fine.  This did not feel like a long ride.  If it would have been 70 degrees I would have been smiling the whole time and been ready to ride it all over again after.  I spent the next day completely active and I had no real residual fatigue.  I think I’ll be able to survive a few more hours on HHH day just fine.

First, though, in three weeks I’m going to race another sprint triathlon, and I do not have high hopes on having any sort of breakthrough performance, but I am open to it.  My joke is that to podium, I need to come off the bike in 1st place and hopefully not let more than two people catch me with my sloooooow run.  But that’s a pretty honest assessment of my fitness right now.  When I ride with cyclists, I feel like the low side of intermediate, but apparently that’s pretty good for recreational triathletes because I typically place pretty highly in my age group on the bike leg.  My running is no better than it was last month, it maybe even be worse if that’s possible, but my hope is that some residual endurance carries over from increased biking and helps out there.

That being said, here’s last week:

This doesn’t sound like a lot but it amounted to 9.25 hours.  That’s plenty.

This is wayyyy less training than my brain says I should be doing but it adds up to 7 hours and that’s also plenty so we’ll just move on. 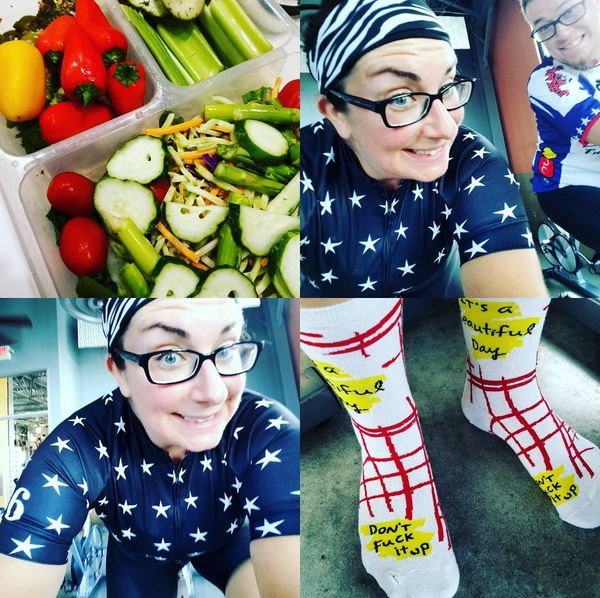 All the veggies.  All of them.

This week was a first FULL week of trying to do all the new things:

Since I no longer have my own mini-fridge at work, I’m packing my lunch into coolers.  While I was a little cranky at the extra prep time at home, I’ve been doing it while prepping dinner the night before so it hasn’t taken *that* long and it’s really convenient to not have to spend 10 minutes in the break room cutting veggies.

Part of that packing is a giant salad with all the veggies every day with avocado oil and vinegar dressing.  This is AMAZING, you guys.  I eat my lunch, whatever it is, a soup or a sandwich or something, and then for the rest of the afternoon I end up grazing on this thing.  Previously, I’d usually end up having some produce go bad, but last week it was all gone by THURSDAY.  This week I’m taking it a step further and making sure my salad has a full RAINBOW going on.  My salad today had romaine and carrots and cauliflower and purple cabbage and shaved brussels sprouts and beets and tomato and cucumber and green olives and goat cheese.  And I’m going to guess it’s about 6 cups of veggies total.

I’m also trying to push fruit and nuts as snacks.  I have a serving of fruit for breakfast, and sometimes, that’s all I’d have before.  I’m trying to keep around at least 2 other small fruits.  I’ve been starting on them as soon as I’m done with the giant bowl of veggies.  For some reason, I gave up nuts unintentionally, and I’ve reversed that decision.  These are now my salty snacks at work.  I have been working my way back with one serving per day and trying to get back to 2-3 some days.

With this, and my normal yogurt or smoothie for breakfast, I’ve not had to adjust my actual lunch and dinner that much.  I’ve been attempting to stick to whole grains instead of whatever sounds the best whenever possible, but I’m not trying to be a complete crazy-person about it.

These all seem to flow pretty naturally.  Somewhere further down the list is booze – bringing my intake closer to the recommendation of 7 drinks per week.  This one is tougher.  I can avoid cake and chips and white bread decently when I put my mind to it because it’s just food.  It’s a momentary pleasure.  Whiskey and wine are my stress relief.  Not my ONLY stress relief by any means, but definitely one of them.  If I could have only one vice, that’s it.  I was all proud of myself that I had cut back last week and then Sunday I had a few unplanned drinks and yesterday I stayed up until FOUR AM polishing off a big bottle of wine with my husband planning and dreaming about vacations.

This is probably a whole separate thing with deeper issues and feeling a little stuck in some areas of life right now.  Wouldn’t it be great if we all were brave enough to do all the things we wanted to do and damn the consequences?  It sounds so simple, but it feels like jumping off a cliff, and I think I’d be less scared of the ACTUAL THING than the metaphor.  That’s a whole post in and of itself, but for now, I’ll just be happy that I’m eating healthier food and let this sleeping dog lie until I’m ready to wake it.

Anyhoo, here are the numbers:

Suuuuper solid by the overall numbers.  I’ve been making a conscious effort to increase my good fats, so I’m not that worried about that number going up a bit.  Let’s delve deeper. 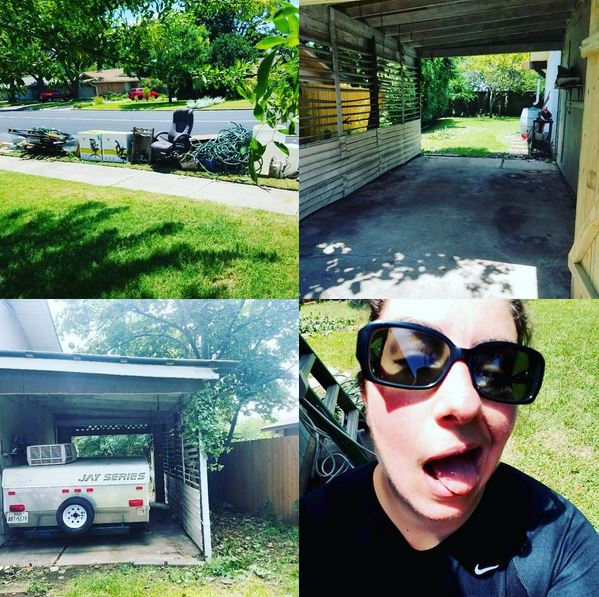 Hot AF, but we got it done!

Zliten and I had some differing opinions about what’s left to do in the office.  In his eyes, the room just needed a few touches and it was ready to start being a room to do work.  In my view, it’s got the majority of a full weekend left before I could even BEGIN to concentrate on creating anything in there.  I think we’ve come to a compromise about what’s left to do and we’re hoping to tackle it in the next few weekends.

#1 – finish getting everything in the office that’s not supposed to be in the office proper – namely the leaning tower of bookcase, all the extra monitors, all the storage boxes, hats, other junk.

#2 – finish getting everything in the office that is actually SUPPOSED to be there – the sewing cart, the monitors in the right spots and getting rid of the old ones, etc.

#3 – clean out the closet – maybe not completely, but enough that we can store everything we need to in there and close the doors (and perhaps have a little extra space so the next time we acquire something, it will have somewhere to go instead of on the floor or cluttering a surface).

So, yeah.  Clean floor.  Closed doors.  I’ll call it done (for this offseason) and then we can move onto the next stage which is dedicating a certain amount of hours in there actually working on projects.

The shed comes in a week.  I’m SO excited for this, it’s been so long since we ordered it and a lot of tetris pieces fall into place once we have that storage.  Once it’s built, we can move all the random things we have in the workout room out to the shed and start setting that room up as well.  The dream of four useable bedrooms is within my grasp.  This means future offseasons can be dedicated to things that are much more FUN than uncluttering full rooms of our house… maybe… someday…

Last week, we did these things:

Six days of food in the woods….

10 Camping Tips for People Who Are Not AT ALL Rugged