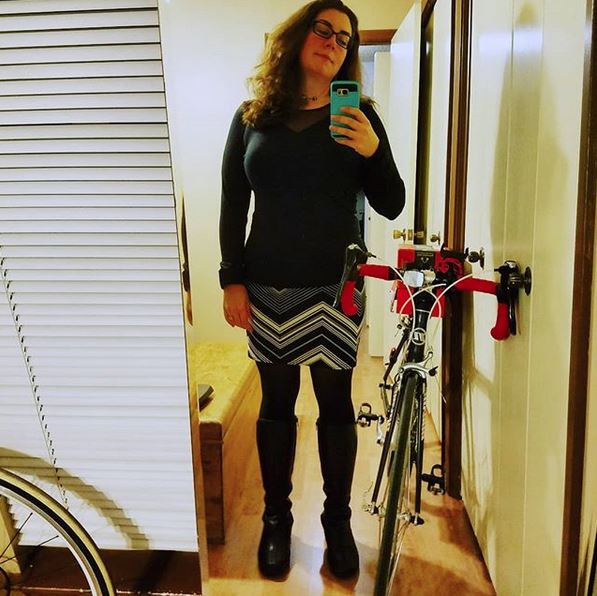 And all I am is a girl, standing in front of a bicycle, wanting to go playyyyy…

However, I like to make time to do at least a quick weekly check in, and I don’t want to break that habit, so here’s some stream of consciousness fun-and-games for posterity about January and what’s next.

While I had almost no leadup to my two races in two weeks, pushing that hard mentally seven days apart took a bit of a toll on my motivation for training after.  My brain needed and felt like it deserved a tiny little “offseason”, so I’ve taken the last two weeks fairly light.  Last week, all I did was ride my bike three times at no pace which could be considered fast.  Fast forward to today, Thursday, and I’ve swam ONCE on Monday and I’ve had my running stuff laid out since then, ready to go, and no dice.  Hoping to break that streak today, but the struggle has been real, y’all.

I’m not stressing about it, though.  My first triathlon this year is May 5th, and I actually plan to mostly soldier through the full season this year without much of a mid-season break.  I will still obviously periodize my training with shifting focus as the months go on, and schedule in recovery weeks, but I don’t plan on any extended month long breaks like I’ve planned in the past.  This means I’m not in a huge hurry to pursue peak form in March or anything, so this lazing around in early February is just fine.

Next week this changes.  While I’m not ready to sharpen the sword just yet, it’s now time to mold the clay (how many different analogies can I use today? let’s find out!).  Two three-week periods of lifting heavy (hypertrophy) and then heavier (maximum strength) with a week rest in between did me was so beneficial last year I plan to repeat it.  My main focus in February and March will be lifting 3xweek, and swim/bike/run (1-2 short sessions of each per week) will supplement this, rather than the opposite the rest of the year.

Of course when the weather is amazing I’ll duck out for a smile paced ride with my camera, but not at the expense of picking up and putting down heavy things.

January was a rough start to the year, I did *okay* the first two weeks, and then racing always throws a wrench in the diet, and then a camping weekend… let’s just say I have made no progress.  I think I’ve done well enough that I’m not backsliding further, but I’m not quite back to that consistently under 170 where I was in early December.  I have yet to transfer everything to trendweight (busy and also, if it doesn’t change maybe my weight doesn’t change? is that how it works?) but it really helped me last year so I really need to do that.

Definitely haven’t gained everything back I lost, but it needs to trend down now, kthx…

But, I’m back, baby.  Since Monday, I’ve had a really good streak with my eating habits, and I’ve declared February a month of no deserts.  Everyone and their mother (and literally my mother as well) is trying to eff this up for me, but I will just take their offerings, put them in my freezer, and break them out when I’m at a higher training volume.

So, the plan and the goal is the same as it ever was.

I know that my weight is collectively what I have done in the last month, and I haven’t been kind to myself.  I’ve been eating things I shouldn’t (and slacking on eating the things I should like those mid-afternoon salads), and probably more importantly, I haven’t been a good sleeper.  I *think* life is starting to calm down a little bit, and I’m hoping that my idiot nights of laying awake thinking about (mostly good exciting but still) stuff will be fewer and further between.

Between lifting and REALLY BUCKLING DOWN FOR REALS in February, I think the scale and I might start being BFFs again.

Over the last few months, work has provided me a great growth opportunity (sadly without the title, YET, but let’s focus on the good parts).  Essentially, this is the thing I’ve wanted to do since I started here almost twelve years ago, and have gotten to do in smaller quantities as I’ve scratched and fought for it, but finally it’s all happening.  Sort of.  However, I really have to fight for this one since I have to forge my own path here and it takes ALL THE CONFIDENCE AND COURAGE I have built up thus far. 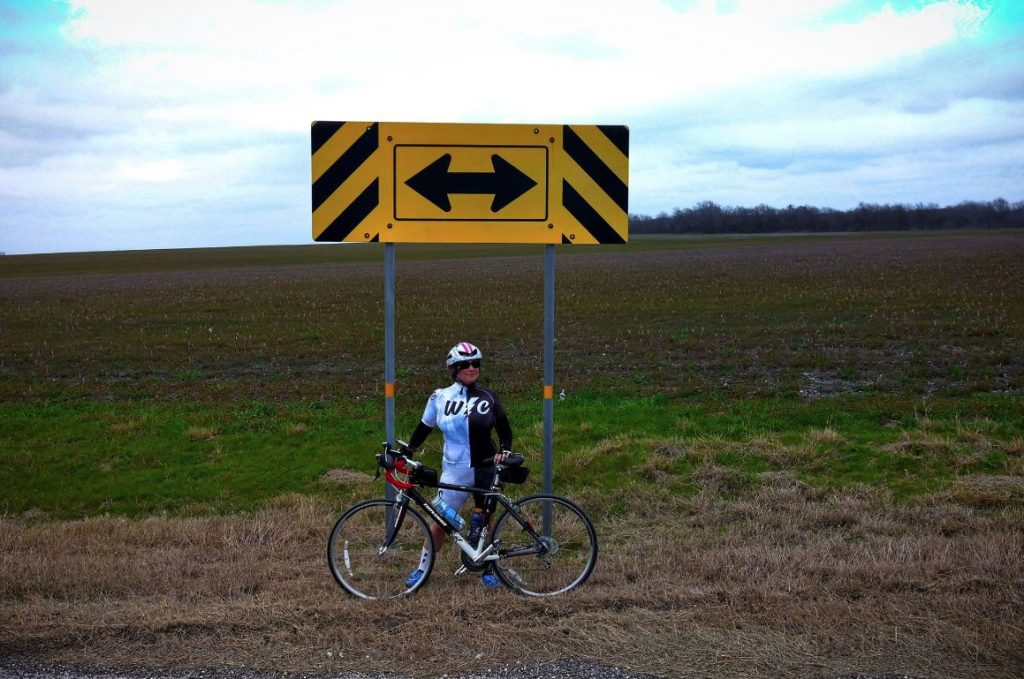 At a crossroads.  Literally.

The self-study I’ve done and have continued to do in the background on these ideals has helped me immensely with this.  I feel like I’m walking a tightrope with no net, one hundred feet above a pit full of hungry sharks, but instead of terrifying it’s exhilarating and exciting and I love the way it makes my emotions swirl, but I also recognize that it is indeed DANGEROUS and RISKY.  This time last year I might have shied away from this, but I spent the 2018 seeking out the dark places, and believing in myself enough to take what I wanted with the tip of my sword.  It’s a different me situation right now, and I’m quite good with dangerous.  It’s miles above boring.

I have about 2031537 essays I want to write about Brene Brown’s Daring Greatly and I’m 25% through the book.  I knew this would be a game changer, but I didn’t realize to what degree.  It’s definitely contributing to my sleepless nights but in a way that’s starting to connect and codify a lot of disparate thought fragments, so it’s worth it.  It’s made me feel a lot less weird about some of the things I’ve been cranking on in the old noggin’ lately.

I will never think about vulnerability and shame the same way.  Her writing shows me the reasons why I have turned away from putting my full heart and soul into racing in the past.  It makes sense why I can say “I want to be a published author” and fully believe it, while simultaneously spending almost a year ignoring the draft I’ve written and spinning up other projects instead.

I’m terrified of being vulnerable.  I’m not a weak person, and I believe in myself, but for things I really care about, I tend to keep them close to my vest.  My writing is good if no one else can read it and cut me to pieces with criticism.  My singing voice is great if no one else can hear it.  I explored that feeling a lot HERE before I actually knew what it was.  As I wrote the words it sounded super stupid, but now I know that’s the shame monster coming out to attack.

The shame monster says “who are you to dress like this”, and I give it this look.

Fear of shame dictates how I hold back sometimes.  If I share that I’m really going for it during a race, and then I blow up or just mentally fizzle out miles from the finish, what will people think of me?  “Oh, there she goes, talking big about her racing and then just failing again and again, yawn.”  If I share the deeper, more vulnerable thoughts I have on social media, what if it gets no attention?  Even worse, what if someone posts a haterade comment?  What if people wordlessly think I’m weird and unlovable?

The crazy thing is that I LOVE other people’s deep thoughts and long, personal posts conveying who they really are.  I value people that share themselves more freely.  However, as it is with most everyone, vulnerability is AWESOME in others and TERRIBLE in ourselves.

So, I’m working on being the courage and confidence I see and want to see in other people.  It’s heavy work, but each time I push myself further into the danger zone which is vulnerability, it feels REFRESHING and REAL and EXCITING and I think I’m even ready to combat my first haters if they show up outside of my own head. Maybe. 🙂

In the wake of all of that noise, I ignored most of the way-too-large to do list I wanted to do in January.  I needed much more downtime than I expected, and it’s okay.  The organizational projects will be there when I’m motivated to do so.  At some point, my book will come back into focus, when I’ve done the sidework I need to do to be ready for it.  I’m thoroughly enjoying tooling around with some different writing styles and it’s all towards the good and betterment of my command of the written word.

I think my February focus will be to take the stress off myself here.  I would really, really, really like to complete one small organizational project, it will make me feel like a better human.  However, I’m going to leave my hobbies up to my own whims.  If little writing projects and reading and photography take up most of my time, that’s totally fine with me.  I need a lack of clutter in the To Do List and some freedom to focus on whatever it is that brings me down the unclear and unpredictable path I need to walk right now.