You guys, I have been having SO MUCH FUN being a normal person for the last week.  I haven’t really missed training yet, and that’s definitely a sign that it was time for some offseason. 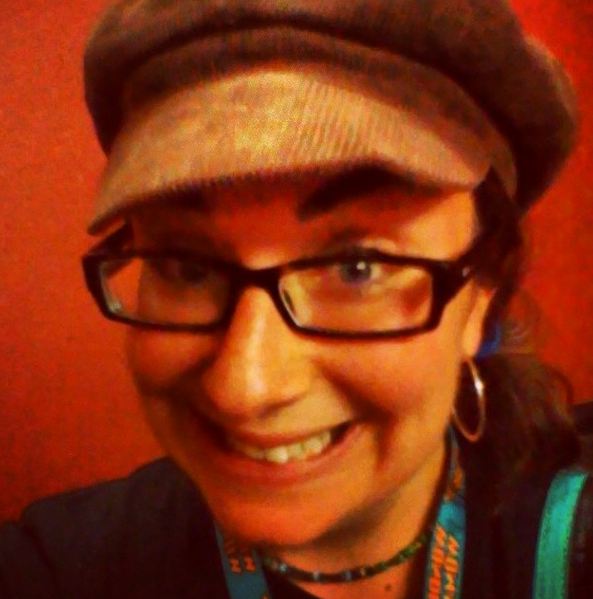 However, one part of my offseason promise to myself was that I would work on cleaning up what goes in my piehole.  Case in point – within 36 hours of the race finishing, I had eaten a burger and fries, pizza, and (unhealthy) mexican food.  It was bad, y’all.  I knew I had to get my shit under control or the severe lack of calorie burn would bloat me up real quick.

Zliten was feeling it too and jokingly said he was going to just eat the penultimate (non-paleo/non-low carb) diet meal of chicken rice and veggies all week.  Well, I thought about it, and it was an interesting challenge to make that boring meal fun while still keeping it healthy.

I also endeavored to:

1. Not have more than 3 serving of rice products per day (not too many carby things even if they were rice things)

2. Try to stick to brown or complex carb rices.

3. Try to keep the sauce calories low-ish if possible.

Here’s some of the food. 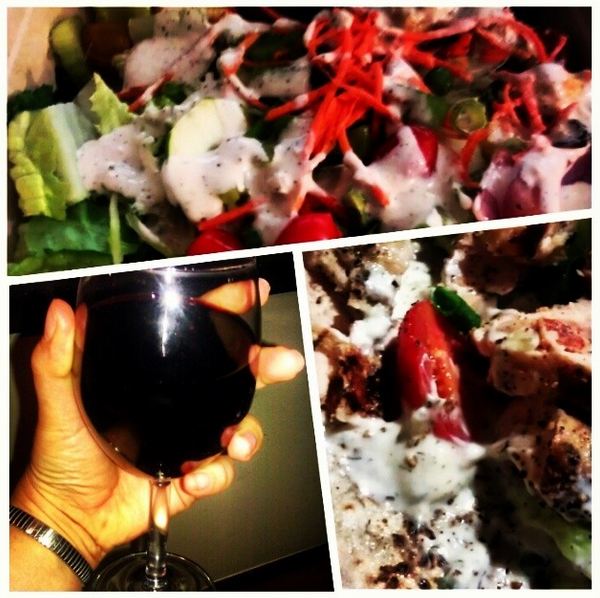 I had a lot of salads.  This particular one was from Whole Foods, but salads are great snacks and foods.  Below was a chicken tzatziki + veggie wrap in a brown rice tortilla (I had that twice).

I also had some wine this week, and it made me remember, I really do quite like wine.  I have been beer beer beer for so long, I forgot.  And, it’s grapes, so it’s fruit, right? 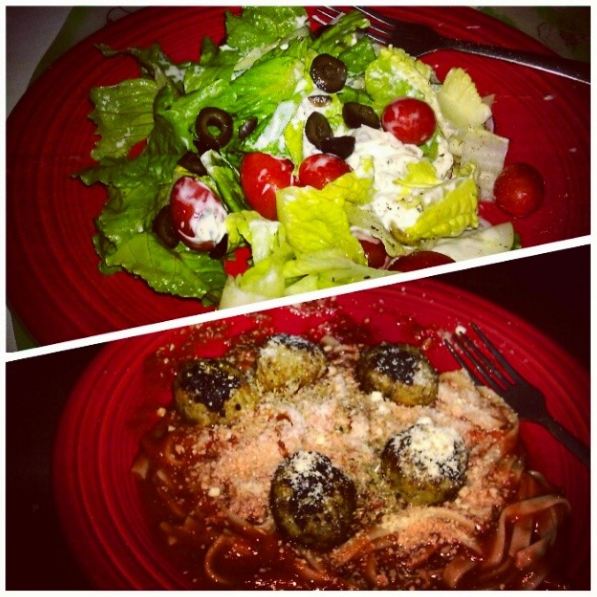 Moar salad, and while it looks like not chicken rice veggies, it totally is.  Those are chicken onion meatballs with brown rice pasta in tomato sauce. 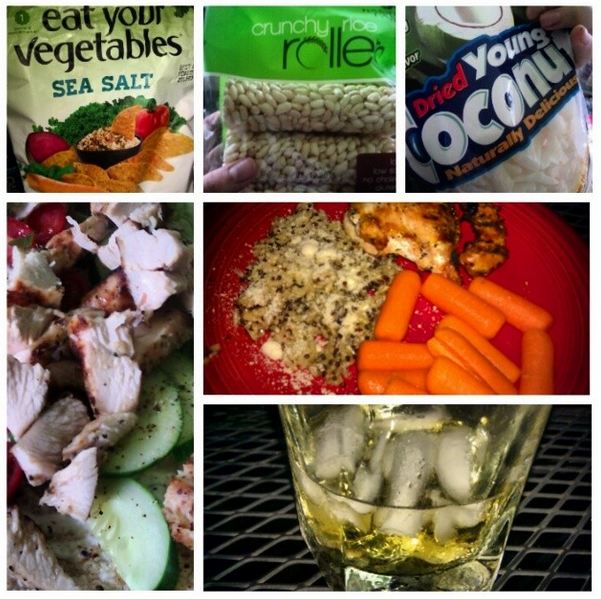 A cornucopia of chicken rice veggie – another greek wrap, veggie chips (not 100% healthy but definitely enjoyed a few servings as a salty snack), dried coconut, rice rollers (not brown rice, but a nice treat with puffed rice and a tiny bit of cane syrup – only 45 calories and a GREAT vehicle for sun butter), grilled chicken with parmesan garlic brown rice and raw carrots because I was too lazy to cook veggies.

And bourbon.  Which, I thought was cheating but it’s actually made from corn, so its sort of a veggie in the way that wine is a fruit.  Right?  Actually, one reason I went SO diet clean was I knew I wanted to celebrate offseason with a few drinks, so I figured it would balance it out.

Going out with chicken rice and veggies actually found me some pretty great meals.

What did I learn?

Chicken, rice, and veggies is pretty much the perfect food for me.  Expanded out to brown rice pasta and brown rice tortillas, I really had no want for anything besides brown rice bread (and honestly, with the tortillas, I was ok) and some variation in protein (fish a few times a week, and beef once or twice) would have been nice, but I was just fine, thanks.

It’s hard to say exactly why, since it was such a stark contrast to the crap I was eating the week before, I was not training, and sleeping a lot, but I felt REALLY GOOD.

Also, I think a little LESS fiber did me good.  I tend to eat a lot of fiber when I’m eating a high volume of food and then I feel bloated.

I tried to track my food, but I only made it through to Wednesday.  Oops.  Baby steps.  I definitely am back to eating 90% good stuff and 10% other stuff, so that’s something.

Going forward?  It’s obvious to me that I do better structuring my meals with a protein, a healthy carb, and a veggie instead of eating crap like burgers or pizza.  Duh.  It helped me detox the sweets – I only had one sweet thing all week and it was half a pancake and it was amazingly sweet and awesome and tasted like a treat, not an all the time food.  I want it less.  Fruit is a treat too.  More duh.

This week I plan to vary up the protein sources, and not strictly avoid carbs besides rice (beans, I have missed you!), but I plan to stick with the brown rice pasta and tortillas instead of whole wheat ones – I think they taste better, actually.  I’m going to try to go with only one carby thing per meal, especially while I’m not training so much.

If I had to pick one meal for the rest of my life, chicken rice and veggies wouldn’t have been the first thing that came to mind, but it would certainly do me well!

Question of the week: What healthy food would you eat for the rest of your life if you could only eat one thing?