It’s not often that I have a disney movie song on repeat in my head, so I’ll just roll with it.  And also, would it NOT BE SO COOL to be able to create ice castles with a flick of your wrist?  Come on, that’s magical. 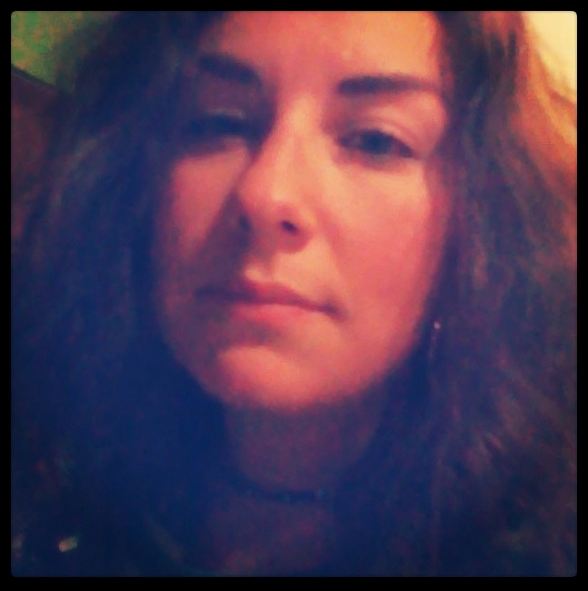 Anyway, if you’re new around here, please note that I am not a huge fan of winter.  This is pretty much as excited as I get for cold and grey and all that January/February jazz.  When it drops below 50, I’d prefer just to wait it out inside (or preferably, on a nice tropical island somewhere), with a small exception on the run – that rule ranges down to about 40 (as long as it’s not windy or rainy).  The cold makes me pout.  Between the weather and the horrible allergy season, I’d be perfectly fine with going to sleep on New Years Eve and waking up around…oh… March.

While I’ve not been immune to whining, it’s been less this year than normal (at least about the cold – the allergies have been wicked).  I think that this is because of a few things:

1.  The actual weather.  It’s been up and down in temperatures and conditions.  For example, we had ice-mageddon to the point where the city pretty much cancelled life two weeks ago Friday, by that Sunday it was in the 70s and sunny, and by that next Tuesday, it was ice-pocolypse round two with lows in the teens.  It sounds weird to love that, but I do.  It’s novel to have things cold and crazy and yucky for a day or two, but after that, I’m over it and need that perfect weather day.

2.  Not being 100% out of shape.  Winter running, even just maintaining a modest 20 miles a week base, and a medium/long trainer ride a week has actually helped me stave off all but a little bit of the great holiday slothening.  It’s even more depressing dealing with the blahs of January and February when I feel like I’m running, biking, and swimming through molasses.

3.   Actually having a race with a semi ambitious goal last month.  I didn’t quite make it, but the act of working toward that helped keep me focused on doing good things, instead of totally slacking.

4.  I’ve actually done a lot of cool things so far this winter.  I’ve taken advantage of the fact that training for a half marathon doesn’t take all that much time and I’ve done a lot of fun stuff.  I’ve said YES in moderation because soon, with tri training ramping up hardcore, there won’t be a whole lot of yes time for a while. 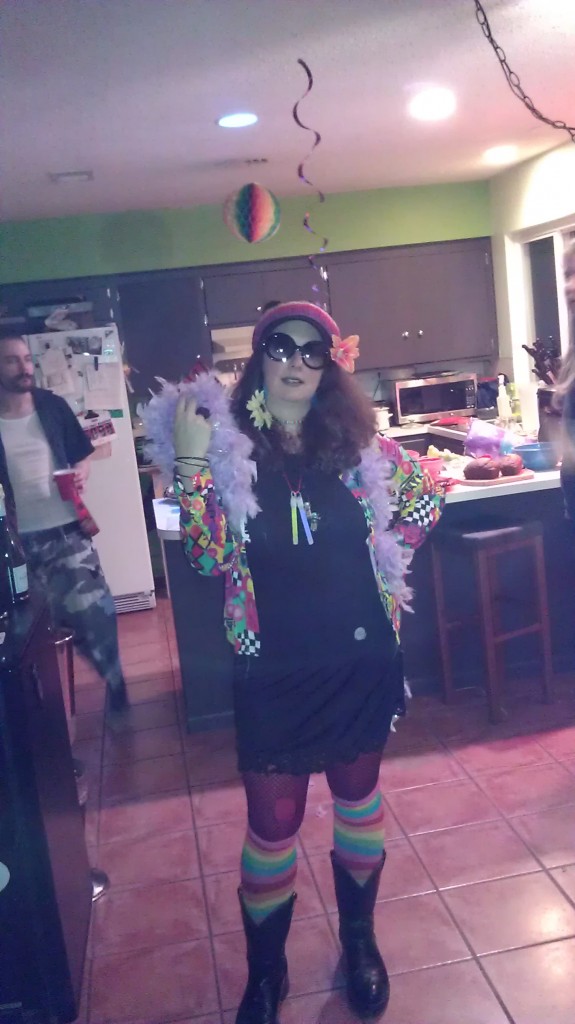 New Years Eve was a blast.  We had a 90s party, and while I had a bunch of different options, every costume was missing just one or two things and I didn’t feel like shopping.  So, I went with what was already in my closet and went all candy raver.  Like… what’s going on, man?  This boa is soooooo soft.  I am soooooo loving the vibe here right now.  (I tried to stay in character as much as possible).

We had crazy cool lights all over the house, plus a disco ball in the living room (instant gym school dance-like scene), 90s trivia, 90s karaoke, flippy cup, and specialty drinks like Spiced Girls, Macaroon Five, and Tripping Daisy.  It was a great start to the year – and I actually remembered the whole party for the first time in, like, ever. 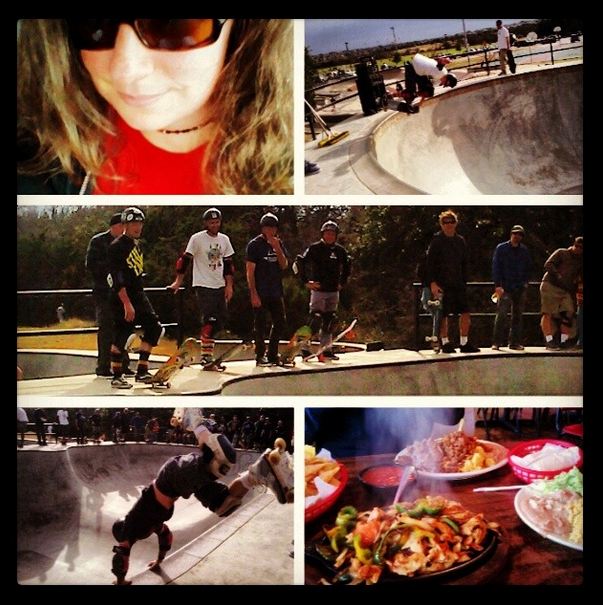 I celebrated a friend’s 40th birthday at a skate park (he’s a pro skater with, like, sponsors and everything).  Yep, you read that right, a skate park.  It was WAY fun to watch the older dudes tear it up, and it was especially fun to watch the guy on modified roller skates.  Totally fun Sunday afternoon! 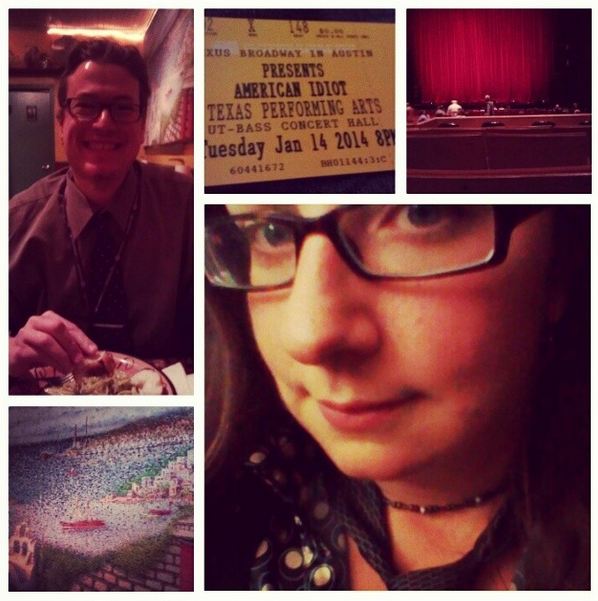 We went to American Idiot care of Yelp.  We had pretty swanky (back) Orchestra seats and while it seemed kinda derivative of Rent, and the dance scene with the tourniquet was tres bizarre, it was an enjoyable way to spend an evening.  Before the show, we tried out this great little greek/italian restaurant and it was amazing.  Dinner and a show on a Tuesday night is a luxury I don’t get often. 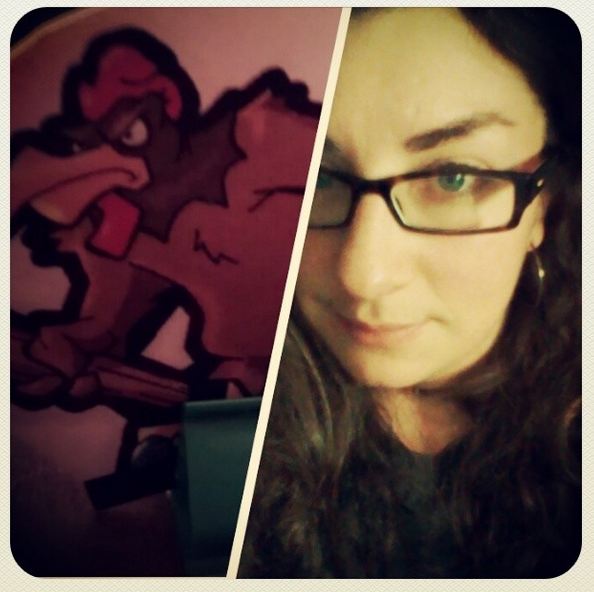 We got to play another installment of our Savage Worlds campagn.  In this one, we’re fighting Nazis in a black and white Casablanca-type world, where Germany was never defeated.  This time we were captured and put on board an airship, and we’re in the middle of mounting our escape – joined by a giant… chicken.  I had to keep him calm.  I spent the evening soothing the savage chicken. 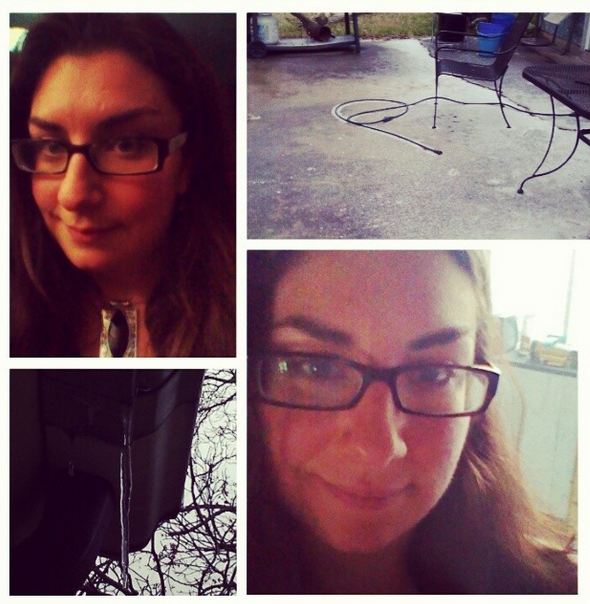 We got a snow day from work.  It seems silly when it’s only a dusting of snow, but the ice was killer and caused over 100 accidents within 24 hours in Austin.  We just stayed home, enjoyed the fireplace, and I batch cooked up a storm! 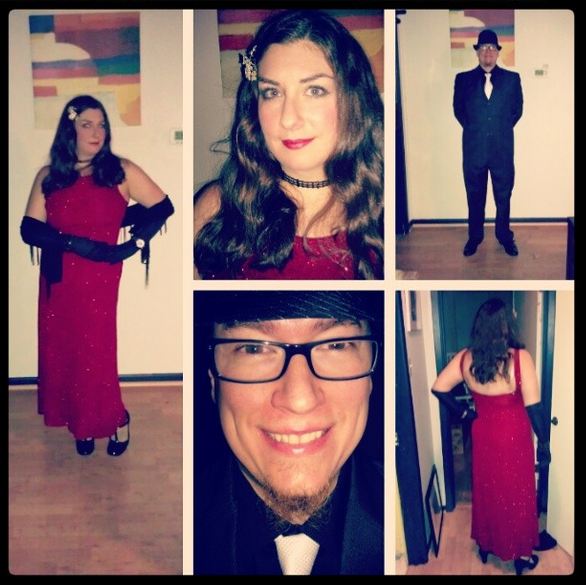 We celebrated another friend’s 40th birthday with a roaring 20s party.  I dug back into my crazy magical closet and came up with this.  I learned how to do the elusive smokey eye, and wore full makeup, did my hair with a straighter AND a curling iron.  It was a lot of fun, and cool to see everyone dressed up.  I stayed up way too late (I fell asleep on my couch with a full beer at 5am), but it was kind of a nice last hurrah before training season starts and I have to be a little more boring. 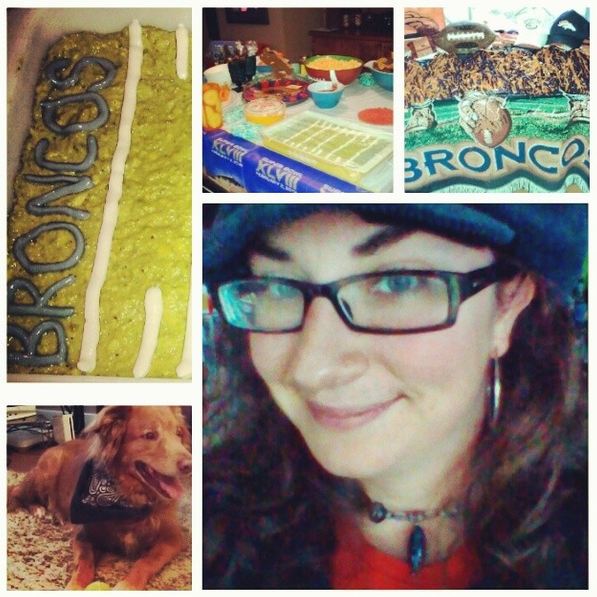 Last weekend was a friend-a-rama.  Three days of plans in a row!  We played munchkin with a group and socialized on Friday, we grilled amazing jerk chicken and pork with awesome cauliflower and caprese salad sides and sang karaoke Saturday, and watched the Superbowl with some die hard Broncos fans (so they were not thrilled by the end, to say the least).

So, we’re over one month down on the sucktastic part of the year without it sucking too terribly bad.  February so far has involved a lot of bike miles, extra long and structured swims, enough easy run miles so I don’t forget how, and expecting to do some other fun stuff when I don’t have my crotch attached to evilbike, including preparing for another half marathon race and vacation!

Also, I’m now on instagram (yes, I’m the last person on earth to join but whatevs).  Add me if you’re there too, I’m Adjusted_Reality.  I’m trying to take more pictures, so I’m doing at least a picture/picture collage a day.

Also, also, big thanks to my fabulous coworker M, who rescued my blogs from wordpress demons.  I owe her a cake.  Or wine.  Or wine cake.